by Best of Theatre Staff on Thursday 18 April 2019, 10:14 am in Cast Changes and Announcements 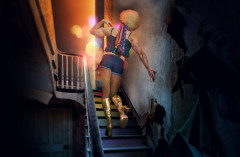 Andy Mientus, Declan Bennett, Victoria Hamilton-Barritt, Cedric Neal and John Partridge will star as Patrick, Dale, Inez, Henri and Buddy respectively in the European premiere of new LGBTQ+ musical THE VIEW UPSTAIRS, which runs from 18 July to 24 August at Soho Theatre, with a press night on Tuesday 23 July.

Broadway and television actor and novelist, Andy Mientus will be making his UK theatre debut in THE VIEW UPSTAIRS. He has starred in numerous musicals including the roles of Marius in Les Misérables, and Hanschen in Deaf West Theater’s revival of Spring Awakening, which he also co-conceived with director Michael Arden. He played regular character Kyle Bishop on the TV show Smash opposite Debra Messing, Jack Davenport and Katharine McPhee. Andy can currently be seen in the new NBC/Universal/WGN America series Gone starring Chris Noth, as well as the upcoming anthology series Dolly Parton’s Heartstrings on Netflix.

John Partridge is well known for his extensive TV work, including the long-running and much-loved role of Christian Clarke in EastEnders (BBC), winning Celebrity MasterChef (BBC), participating in BBC1's gymnastics show Tumble and being a judge on Over the Rainbow (BBC). John began his career at the age of 16 in the original UK tour of Cats and subsequently went on to star as Rum Tum Tugger in both the West End production and the film opposite Elaine Paige and John Mills. John’s other theatre credits include Zach in A Chorus Line (London Palladium), Robert Martin in The Drowsy Chaperone(Novello Theatre), The Fix(Donmar Warehouse) directed by Sam Mendes, Billy Flynn in Chicago (national tour), in Miss Saigon (national tour) and most recently Turai in Tom Stoppard's Rough Crossing (national tour).

Actor and recording artist, Declan Bennett, is best known for playing the regular role of Charlie Cotton in EastEnders from 2014 to 2017. He was in boyband Point Break before beginning his career on stage, where he has starred in shows such as Jesus Christ Superstar (Open Air Theatre), Once (Phoenix Theatre), American Idiot (St. James Theatre/Broadway), Rent (Nederlander Theatre/Broadway/US National Tour), Fatherland (Lyric Hammersmith) and Kiss of the Spider Woman (Menier Chocolate Factory).

Cedric Neal was a semi-finalist in The Voice, 2019 on ITV1, as part of Team Tom. Cedric has starred in Motown the Musical (Shaftesbury Theatre), played alongside Audra McDonald in the 2012 Tony award-winning Broadway production of Porgy and Bess, and, most recently, performed as the Arbiter in Chess (London Coliseum).

The musical opens in present day when Wes, a young fashion designer buys an abandoned space, not realising this had been the UpStairs Lounge, a vibrant '70s gay bar in the French Quarter of New Orleans, which, in 1973, was burned down in an arson attack, killing 32 people, and making it the worst attack on the LGBTQ+ community until the 2016 shooting at The Pulse nightclub in Orlando. THE VIEW UPSTAIRS brings to life this forgotten community and takes the audience on an exhilarating journey of seduction and self-exploration, celebrating the lives of those forgotten, while featuring a soulful, rock and jazz score.

THE VIEW UPSTAIRS opened to rave reviews Off-Broadway in 2017, where Entertainment Weekly described it as “a moving homage to LGBT culture, past and present”, and the musical gained support from some of the LGBTQ+ community’s biggest advocates, including RuPaul. There is an original cast recording available on Broadway Records.

The London production of the musical is one of ten that have been and are being mounted around the world between 2017 and 2019. As well as a triumphant run Off-Broadway, THE VIEW UPSTAIRS has enjoyed multiple regional US productions and a recent Australian premiere.

The musical is written by young up-and-coming artist Max Vernon and will be directed in London by Jonathan O’Boyle (Aspects of Love, Pippin, Hair), with choreography by Fabian Aloise (Evita at Regent’s Park Open Air Theatre in 2019, The Rink, Our House, Working). The show will have set and costume design by Lee Newby, lighting design by Nic Farman, sound design by Adam Fisher, with casting by Will Burton CDG.