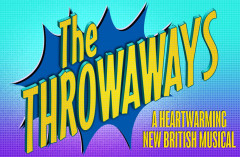 Written by Dylan Wynford, with an uplifting folk score, The Throwaways follows the story of a group of misfits attempting to save their beloved comic bookstore from closing by entering the World Championships of a popular trading card game.

Jamie Lambert and Eliza Jackson, CEO and Creative Director of Lambert Jackson Productions today said “We couldn’t be happier with this brilliant cast who will be working on this brand new British musical. We are so excited to see the stunning music and script by Dylan Wynford come alive with this very exciting cast.”

Dylan Wynford writes. His previous writing credits include Bright Young Things (The Other Palace), The Lost Ones (BEAM 2018, Bush Theatre), and Catatonic Matt. His acting credits include Now and Then (Above the Stag), Just So (Barn Theatre), Parade (Frogmore Papermill), My Lands Shore (Theatr Soar) and Sing Street (New York Theatre Workshop). Dylan is the lead singer of the band Dylan Wynford and His Yesteryears.