Full cast announced for THE SWEET SCIENCE OF BRUISING

by Best of Theatre Staff on Thursday 25 April 2019, 10:56 am in Cast Changes and Announcements 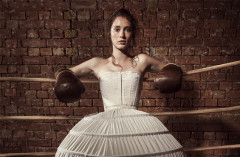 Troupe today announces full cast for the The Sweet Science of Bruising by Joy Wilkinson which transfers to Wilton’s Music Hall,following its sold-out run at Southwark Playhouse last year.

“When that bell rings, your life is entirely in your hands.”

1869. Deep in the heart of Victorian London is a theatre where only the strongest survive. Controlled by men and constrained by corsets, four very different women are drawn into the dark underground world of female boxing; each finds an unexpected freedom in the ring. As their lives begin to intertwine their journey takes us from grand drawing rooms to rowdy backstreet pubs where the women fight inequality as well as each other. But with the final showdown approaching, only one can become the Lady Boxing Champion of the World...

Fresh from a sold-out run at Southwark Playhouse, Joy Wilkinson (current writer for Doctor Who) brings to life this little-known but important part of the City’s history. Featuring an ensemble cast and thrilling live boxing matches, The Sweet Science of Bruising is staged in the electrifying atmosphere of the world’s oldest grand music hall located in London’s East End, Wilton’s Music Hall.

Joy Wilkinson is an award-winning writer working across theatre, film, television and radio. Her stage plays have been widely produced in the UK and internationally, and she has won prizes including Soho Theatre’s Verity Bargate Award and the International Student Playscript Competition. Her plays include Fair (Finborough Theatre/Trafalgar Studios/UK tour), Now is the Time (part of the Tricycle Theatre’s Olivier Award-nominated ‘Afghanistan’ season which toured the USA and was revived in 2017 by Teatro Elfo Puccini, Milan), Acting Leader (‘Women Power and Politics’ season, Tricycle Theatre) and Britain’s Best Recruiting Sergeant (Unicorn Theatre). She has been awarded two attachments at the National Theatre Studio and is published by Oberon Books and Nick Hern Books. For television, Wilkinson was a graduate of the first BBC Drama Writers Academy, and her screen credits include writing on the most recent series of Doctor Who, as well as Casualty, Holby City, Doctors and Land Girls. In addition, she wrote Nick Nickleby, a critically-acclaimed five-part modernisation of Nicholas Nicklebyfor BBC1. Wilkinson’s extensive work for BBC Radio 4 includes numerous adaptations and original plays.

Emma McDonald plays Anna Lamb. Her theatre credits include Macbeth, A Midsummer Night’s Dream, The Picture of Dorian Gray (The Watermill Theatre), Twelfth Night, Romeo and Juliet (The Watermill Theatre/European tours), Much Ado About Nothing (Iris Theatre) and Pride and Prejudice (Sheffield Theatres).