Review of The Nether at The Duke of York Theatre 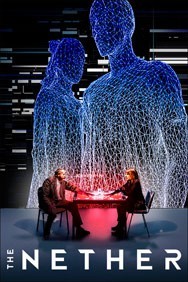 Anyone fearing the West End Theatre has become too safe, too commercial, too touristy can take comfort in this transfer from edgy new play powerhouse The Royal Court, developed by Headlong, one of our top theatre companies and now imported to the Duke of York by one of the world’s most powerful producers Sonia Friedman.

This may seem an odd thing to say given the subject matter but it is the perfect play for a sophisticated date night.

It’s a mere 80 minutes long leaving you plenty of time to grab dinner afterwards and talk about what you’ve seen. And you will want to talk about it. After the press night the audience was buzzing with what they’d just witnessed and I overheard some very interesting discussions around me as we filed out.

After the press night the audience was buzzing with what they’d just witnessed and I overheard some very interesting discussions around me as we filed out.

One of the most vital yet almost taboo questions our society must address is whether we give paedophiles an outlet for their proclivity on-line or is it better to dictate that they bottle up their feelings. Of course child pornography is completely unacceptable as children will have suffered in its creation but what if the child and the would-be assailant were Avatars, computer generated versions of themselves?

Clever playwright Jennifer Haley has managed to fashion an award winning script that projects the problem into the distant future, depicting the twists and turns of an investigation by the authorities into an obscure web environment created to allow paedophiles just such an experience.

The futuristic setting and the fact that at no point is the audience expected to witness anything disturbing, despite the growing sense of menace that grips the action, means it’s easy to keep your response objective. This distancing is very useful as we might have felt emotionally battered if events were grounded in an immediate reality.

Half of the action is set in a grey, interrogation environment where an old-school cop is doing some old-school badgering of a prisoner who believes the paedophile fantasy site he has created operates within the law. It’s a site where Avatars are welcomed into an idyllic Victorian world where they’re free to assault and even kill an Avatar child.

The other half of the action takes place in a shimmering, breathtakingly beautiful representation of the site on the web, or Nether as the we’re told the internet will be known in the future. The stunning Victorian idyll is perfectly conjured up by Es Devlin’s use of carefully chosen antique elements amidst mirrors and glass like walls which make events appear to float in mid-air before you.

The hectoring detective played by Amanda Hale is interrogating Sims, the sites host (A formidable looking Stanley Townsend) and Doyle (a crumpled David Calder) who uses it. Both men are anxious that the site and especially the Avatar child at its heart survive. The figures in the fantasy are the on-line versions of the characters in the interrogation but as Avatars need bear no resemblance to their creators the question becomes who is who?

The part of the little girl in the fantasy, Iris, is alternated each night by 1 of 4 child actors, Jamie Adler, Zoe Brough, Perdie Hibbins or Isabella Pappas (who I saw – excellent) The presence of a child actor at the heart of the fantasy further ratchets up our anxiety as we fear their participation in a play exploring such a dark subject might distress them but at no point are the girls expected to portray anything other than a pert, canny Victorian princess. There are no overtly sexual moments in the play leaving the horror of it to the imagination of the audience.

The whole thing is directed with an admirable lightness of touch by Jeremy Herrin who is quite the director of the moment following his smash hit production of the RSC’s Wolf Hall adaptation which is about to open on Broadway.

I thoroughly recommend this as a vibrant, fleet-footed engagement with a tricky subject which allows you a detachment that provokes discussion and debate.

This Theatre was recently home to the play POSH which has become a great film, THE RIOT CLUB. Let’s hope there’ll be a film of the Nether too.

Book now, THE NETHER is only on for a limited time.