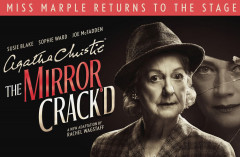 Original Theatre are delighted to announce the full cast of their brand new production of Rachel Wagstaff’s acclaimed adaptation of Agatha Christie’s THE MIRROR CRACK’D. The production, directed by Philip Franks, will begin its UK Tour at Devonshire Park, Eastbourne on 8 September 2022.

The final members of the cast to be announced are Oliver Boot as Chief Inspector Craddock, Lorenzo Martelli as Guiseppe Renzo, Chrystine Symone as Lola Brewster and Holly Smith in the ensemble.

Oliver Boot’s theatre credits include The Curious Incident of the Dog in the Night-Time for the National Theatre’s UK and International Tours, Finding Neverland, Oliver! And Piaf at Leicester Curve, Antony and Cleopatra, A Midsummer Night’s Dream, Timon of Athens, King Lear and Richard II for the Globe Theatre, and an award-winning world tour of Othello for Cheek by Jowl. In 2006, Oliver was asked to perform Henry V for Her Majesty the Queen and His Royal Highness the Duke of Edinburgh at a private dinner party thrown by the American Embassy. On television, Oliver played regular Ben Woodman in the BBC’s Holby City.

Chrystine Symone’s theatre credits include Megan in The Girl on the Train (Upstairs at the Gatehouse), Fay Apple in Anyone Can Whistle (Southwark Playhouse) and Lamplighter/Understudy Gloria in The Magician’s Elephant (RSC).

In 1960s England, a wind of change is blowing through the land. It has even reached the sleepy village of St Mary Mead. There’s a new housing estate, which alarms the villagers as much as it intrigues them and, even more unsettling, a rich American film star has bought the manor house. Jane Marple, confined to a chair after an accident, is wondering if life has passed her by. Then there is a shocking murder, and Miss Marple must unravel a web of lies, danger and tragedy. This adaptation of Agatha Christie’s famous novel brings real emotional depth and psychological insight to a thrilling story of secrets, loss and revenge.

THE MIRROR CRACK’D will be directed by Philip Franks (Barnes’ People, The Haunting of Alice Bowles, The Habit of Art, The Croft and A Cold Supper Behind Harrods) and designed by Adrian Linford, with lighting design by Emma Chapman, sound design by Max Pappenheim, casting by Ellie Collyer-Bristow CDG and movement direction by Sophia Vi.

The UK Tour will be produced by Alastair Whatley and Tom Hackney for The Original Theatre Company. The Original Theatre Company recently won a Critics’ Circle Award for their outstanding contribution to British Theatre during lockdown, through which they produced acclaimed online productions of Sebastian Faulks's Birdsong Online, Louise Coulthard’s Watching Rosie, Torben Betts’s Apollo 13: The Dark Side of The Moon, Philip Franks’s The Haunting of Alice Bowles and Peter Barnes’s Barnes’ People. More recently, they have produced stage and hybrid productions ranging from world premieres of Frazer Flintham’s Into The Night to Ben Brown’s The End of The Night at Park Theatre, as well as tours of The Hound of The Baskervilles, Being Mr Wickham, The System, A Splinter of Ice, The Habit of Art, Invincible and Birdsong. They recently announced their new playwriting festival ‘Originals’ in partnership with Riverside Studios, which, in early July, saw the three winning plays performed and streamed live over consecutive days.