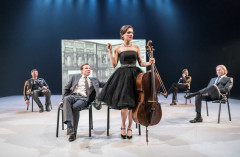 Cheek by Jowl reunites with the Moscow Pushkin Drama Theatre on Francis Beaumont’s outrageous dark comedy, The Knight of the Burning Pestle, hilarious and terrifying in its relevance to our times. Following its Paris and Moscow premières, the production comes to London for performances at the Barbican - where Cheek by Jowl is an Artistic Associate, from 5 to 8 June with a press performance on 5 June.

Produced by Cheek by Jowl and Moscow Pushkin Drama Theatre

in a co-production with the Barbican, London; Les Gémeaux/Sceaux/Scène Nationale;

Performed in Russian with English surtitles

The Knight of the Burning Pestle is Cheek by Jowl and Moscow Pushkin Drama Theatre’s second co-production, following the award-winning Measure for Measure, seen at the Barbican in 2015. This is Cheek by Jowl’s sixth Russian-language production and represents a long-term collaboration with acclaimed Russian performers, including Alexander Feklistov, who performed in all previous co-productions with the Chekhov International Theatre Festival: Boris Godunov (2000 - 2010), Three Sisters (2005 - 2013), The Tempest (2011-2014) and Twelfth Night (2003 – 2018). Regular Cheek by Jowl performers Anna Vardevanian and Andrei Kuzichev are joined by Agrippina Steklova and actors from the Pushkin Theatre’s full-time ensemble.

The London Merchant, a play about two dysfunctional families begins. But suddenly, from the audience, a grocer and his wife clamber onto the stage, explaining to the astonished actors that while they quite like the play, it could be better and more exciting. Apparently, singing, dancing, an exotic foreign location and the appearance of a knight are the missing ingredients. Luckily, their apprentice Rafe is just the man for the job.

Director Declan Donnellan and designer Nick Ormerod collaborate with Moscow’s Pushkin Theatre on Francis Beaumont’s subversive play within a play. The Knight of the Burning Pestle is a breathtaking comedy, hilarious and terrifying in its relevance to a post-expert world where everyone can be famous and anyone can write the story.

Declan Donnellan directs The Knight of the Burning Pestle. He is joint founder of Cheek by Jowl with Nick Ormerod. As joint Artistic Director of the company, he has directed over 40 productions. In 1989 he was made Associate Director of the Royal National Theatre in London where his productions have included Fuente Ovenjuna, Sweeney Todd, The Mandate and both parts of Angels in America. His other directing credits include for the Royal Shakespeare Company The School for Scandal, King Lear (Academy 2002) and Great Expectations; Le Cid (Avignon Festival), Romeo and Juliet (Bolshoi Ballet, Moscow), The Winter’s Tale (Maly Drama Theatre of St Petersburg). His production of Shakespeare in Love played at the Noël Coward Theatre, and most recently in Canada. His first film was Bel Ami, co-directed with Nick Ormerod. In 1999 he was invited by Valery Shadrin to form a company of actors in Moscow under the auspices of The Chekhov International Theatre Festival. He has received awards in Moscow, Paris, New York and London, including three Laurence Olivier Awards - Director of the Year (1987), Best Director of a Play (1995) and the Olivier for Outstanding Achievement (1990). In 2016 he received the Golden Lion for Lifetime Achievement from the Venice Biennale. He was made Chevalier de l'Ordre des Arts et des Lettres in France, and this year was awarded the Golden Mask and the Stanislavski award in Russia for Outstanding Contribution to the Development of Theatre.