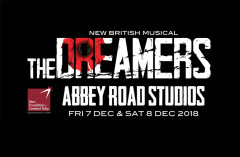 The producers of the brand-new British musical “THE DREAMERS” are thrilled to announce four premiere performances of the show at the world-renowned Abbey Road Studios on Friday 7 December and Saturday 8 December at 2.00pm and 7.30pm.

“THE DREAMERS” will mark the first time in history that a musical has been performed at Abbey Road Studios. The iconic Studio One, which has played host to the likes of the London Philharmonic Orchestra, Stevie Wonder, Sting and U2, will be transformed into a theatre especially for this event. These performances are co-produced byStars Foundation for Cerebral Palsy, and any profits from the event will go directly to the charity.

At the outbreak of the First World War, a young and inexperienced officer, Reggie, is pushed into leadership by his rich and powerful father. On an ill-fated voyage to the battlefield, Reggie struggles to hold his unit together when a jealous and bitter recruit, Jack, stirs trouble amongst the men. Disaster strikes when their ship crashes, and amidst the chaos, Reggie and Jack are thrown together. Inspired by true events, “THE DREAMERS” is a testament to the power of comradeship in the face of adversity.