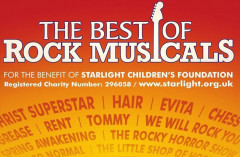 Initial casting is announced for the next two performances of THE BEST OF ROCK MUSICALS (2020) at the Eventim Apollo, Hammersmith, on Sunday June 14th, 2020.

On Sunday 14 June 2020 at London’s Eventim Apollo, Hammersmith, there will be two more concerts of The Best of Rock Musicals for the benefit of the Starlight Children’s Foundation.

The Starlight Children’s Foundation brightens the lives of seriously ill children by granting wishes-of-a-lifetime and providing fun, laughter and entertainment to children in hospitals and hospices across the UK.

With musical directors Stuart Morley (We Will Rock You, Big, and Only Fools and Horses) and Kevin Amos (Jesus Christ Superstar), and choreographer Kevan Allen (Jesus Christ Superstar), The Best of Rock Musicals will again be devised and directed by Hugh Wooldridge who says “This event is a must for all who love rock musicals and musical theatre.  With the very best artistes in the world coming together to celebrate the very best in rock musicals from the last 50 years. Come along again on our 21st birthday and join in the fun and support this most splendid charity, whilst raising the roof of the Eventim Apollo, Hammersmith.”

Further performers will be announced in due course.  All artistes are subject to their professional commitments.