THE BEST MAN is coming to London's West End 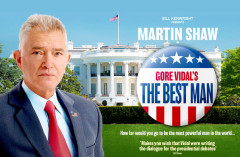 Written and produced on Broadway nearly 60 years ago, long before the battles of Trump vs Clinton and May vs Corbyn, The Best Man never achieved a West End transfer at the time because it was thought that American politics were of no real interest to London audiences.

Martin Shaw is William Russell, esteemed ex-Secretary of State and US presidential candidate, with something of a philandering reputation. Jeff Fahey is Joseph Cantwell, an ambitious populist newcomer, opposing Russell for the party nomination.

Running neck and neck, the only thing that might separate the candidates are endorsements from a respected Ex-President (Jack Shepherd) and party big-wig (Maureen Lipman). As the race heats up the campaign gets personal, involving Russell’s estranged wife Alice (Glynis Barber) and Cantwell’s wife Mabel (Honeysuckle Weeks). But where does compromise end and corruption begin? How far will they each go to become the most powerful man in the world? And who in the end will be proven to be “the best man”?

The play mirrors the often surprising results of campaigning, and the all-too-often unscrupulous world of politics.

Leading the cast is Martin Shaw. Best known to TV audiences for the title-roles in Judge John Deed, Inspector George Gently and The Professionals, Shaw’s leading-man West End stage roles have included Twelve Angry Men, A Man For All Seasons and The Country Girl directed by Rufus Norris.

Jeff Fahey has starred in many indie movie classics, including the title role in cult sci-fi hit The Lawnmower Man opposite Pierce Brosnan and in Quentin Tarantino’s Grindhouse. He has rarely been off our TV screens, starring in US series The Marshal and more recently in Lost. He returns to the West End stage following his acclaimed performance in Twelve Angry Men alongside Martin Shaw.

One of Britain’s finest and best loved film, TV and theatre actresses Maureen Lipman (CBE), is known on the big screen for roles such as Trish in Educating Rita and in the Oscar winning film The Pianist as well as for her wide ranging TV appearances – from the landlady of The Rover's Return in Coronation Street, to the Princess of France in Love's Labours Lost. A prolific stage actress, Lipman is an Olivier Award winner (See How They Run) and has appeared in some 20 West End productions.

Star of TV’s Wycliffe and Bill Brand, Jack Shepherd’s extensive stage career includes his award-winning performance in Glengarry Glen Ross and The Iceman Cometh at the National Theatre. Glynis Barber is known for Dempsey and Makepeace and popular roles in Night and Day and EastEnders. Her stage credits include, the original London Cast ofBeautiful: The Carole King Story at the Aldwych Theatre, and The Graduate. And Honeysuckle Weeks is best known for starring alongside Michael Kitchen as Samantha Stewart in hit TV drama Foyle’s War. Her theatre credits include The Shining Lives at the Park Theatre, Pygmalion and Love’s Labour’s Lost at Chichester Festival Theatre and A Daughter’s A Daughter in the West End.

Born into a distinguished political family, Gore Vidal was a prolific writer known for the waspish wit, which peppered his essays, novels, screenplays and Broadway plays. Among his most famous works are Myra Breckinridge and Lincoln. The Best Man premiered on Broadway in 1960 and was nominated for six Tony Awards, including ‘Best Play’. Vidal adapted it into a film with the same title in 1964 starring Henry Fonda, Cliff Robertson and Lee Tracy, who was nominated for an Oscar for his portrayal of the crafty ex-President. The play received a major revival on Broadway in 2012 starring James Earl Jones and Angela Lansbury, and earned two Tony award nominations including ‘Best Revival of a Play’.

Further casting to be announced.

The Best Man is produced by Bill Kenwright and directed by Simon Evans, with set and costume design by Michael Taylor, lighting design by Chris Davey and composition and sound design by Ed Lewis.