by Best of Theatre Staff on Tuesday 1 October 2019, 12:05 pm in Cast Changes and Announcements 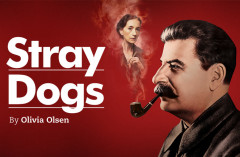 Anna Akhmatova, the most celebrated poet of her generation, has lost her first husband to the purges and her son to state prison, where he awaits execution. Now, Stalin, the tyrant responsible for the murder of everyone close to her, wants a favour…

Plunged so far into obscurity she is believed to be dead, Anna is offered a renewal of life when the Russian/British philosopher Isaiah Berlin risks the hazards behind the iron curtain to find her. But in a world where poetry is a force that can control and move masses for good or ill, which side of the curtain will her loyalty lead her? How far will she go to save a life? How far will she go to save herself?

Based on true events, Stray Dogs depicts the story of one of the most extraordinary women of the 20th century, as she must choose between her duty to her son, her country, her art and herself. This urgent and relevant play explores the nature of tyranny and how it affects both the political landscape of the past and the present.

Olivia Olsen said today, ‘Stray Dogs is a homage to Anna Akhmatova, a poet laureate living during Stalin’s great purges, an homage to all voices that have been and are gagged. Poetry is beyond politics, beyond advertising, entertainment and beyond information, necessary and dangerous.

Stalin knew this. He knew literature was a weapon and needed Akhmatova’s fame and genius to ﬁll a void... I wrote the play to ﬁnd out how Akhmatova, whose poetry was born in the Stray Dog Cabaret in St. Petersburg, answered.’

Olivia Olsen is the writer and plays Anna Akhmatova. Her writing credits include: Penelope the Odyssey Through Her Eyes, Parizal and Dear Elephant. As an actress, her credits include Night Breath (Donmar Warehouse), The Syringa Tree (UK tour), Agamemnon (Dorothy Somerset Theatre), Nijinsky, Strings on a Rose (York Theatre Royal) and Lettice and Lovage (UK tour).

Ian Redford plays Joseph Stalin. His previous theatre credits include: Breaking The Code (Salisbury Playhouse), Love And Information (Shefﬁeld Crucible), Loot (Park Theatre), Travels with My Aunt (Citizens Theatre), The Alchemist, Mad World My Master, Candide, The Roaring Girl, The Witch of Edmonton, Arden of Faversham (RSC), The Seagull (Regent’s Park Open Air Theatre), Robin Hood (Cambridge Arts Theatre), Brimstone And Treacle (Arcola Theatre), The Gatekeeper, Dr Faustus (Royal Exchange, Manchester), Love the Sinner, Mother Clap’s Molly House (National Theatre), Six Degrees of Separation (The Old Vic), All My Sons (Leicester Curve), Helen, Romeo and Juliet, The Secret Theatre (Shakespeare’s Globe), She Stoops To Conquer, Free (National Theatre), Rita Sue and Bob Too, A State Affair, Some Explicit Polaroid, Our Country's Good (Out of Joint), Bruises and Built on Sand (Royal Court Theatre). For television his credits include: series regular Keith Appleyard in Coronation Street, Strike, King Charles III, New Tricks, Derailed, House of Elliot, Bergerac, One Foot in the Grave, Moon and Son, The Men’s Room, The Devil’s Whore, Heartbeat and Foyle’s War. For film, his credits include: The Man with the Iron Heart, Mary and Martha, The Trial of the King Killers, She Stoops to Conquer, Trial by Fire, I.D., Remains of the Day, Just Like A Woman, Three Men and a Little Lady and The Great Escape.