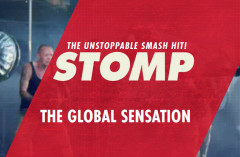 STOMP was created by Luke Cresswell and Steve McNicholas and was first performed in 1991 in Edinburgh. The show played Sadler’s Wells Theatre in January 1994 and won the Olivier Award for Best Choreography, before opening in New York in February of the same year. The European company was created in 1997 and began the show’s London run at the Vaudeville Theatre on 25 September 2002, transferring to the Ambassadors Theatre on 27 September 2007.

One of Britain’s greatest exports, STOMP has toured the globe for 25 years, playing to more than 12 million people in 53 countries across 6 continents. There are currently four STOMP companies performing worldwide, including New York, where the show has been running for over 22 years, London, now in its 15th year, a world tour and a North American tour. STOMP has just completed a very successful 10-week season in Beijing and will play India for the first time this year.

STOMP is presented in London by Yes/No Productions and Glynis Henderson Productions Limited.