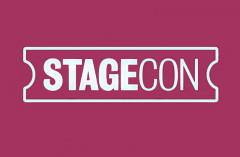 For the first time ever in the UK, StageCon, a convention for theatre fans throughout the UK and Europe, will be held over the weekend of 3 & 4 November at Shoreditch Town Hall in London.

UK General Manager, James Yeoburn, said of the convention,“StageCon presents a really exciting opportunity for fans from across the UK and the EU to come together in London to celebrate the magic of theatre. Those attending can expect to enjoy a diverse programme of 100+ hours of events and performances from everyone’s favourite artists, theatre makers and shows – from the West End to London’s Fringe and beyond.”

Like New York’s successful theatre convention, BroadwayCon, the UK’s StageCon intends to establish itself as an annual event in London’s theatre calendar to promote and celebrate the wealth of talent that exists this side of the Atlantic.

Programming will include a range of live performances, sing-a-longs, discussions, cast reunions, panels, games, exclusive previews, workshops, meet and greets, and showcases. A ‘Village’ of stalls sharing and selling a range of goods, merchandise and theatrical services will be housed within a ‘back stage experience’ specially crafted in the basement of the venue. Vendors and exhibitors already confirmed include The National Theatre Bookshop, Zeat Art, SIMG Records, WhatsOnStage, The Royal Theatrical Fund, Theatrical Rights Worldwide and MX Academy. Shaftesbury Avenue staple The Theatre Café is confirmed to operate a pop-up out of Shoreditch Town Hall’s on-site café.

Shoreditch Town Hall, the official venue partner for StageCon, is one of the Capital’s grandest civic buildings and is situated in the heart of one of the most vibrant areas of London. Its beautiful 750-seat auditorium will be the convention’s ‘Main Stage’, with its other rooms transforming into workshop and panel spaces. The upper floor will be home to the meet and greets. In recent years the venue has established itself as a flagship arts, community and live events space.

StageCon will be donating a portion of profits to The Royal Theatrical Fund (RTF), which supports all who have worked professionally in the entertainment industry but have now fallen on hard times. RTF’s President, Robert Lindsay, said, “We are all delighted that The Royal Theatrical Fund is the chosen charity for StageCon and are looking forward to being involved with this new and exciting opportunity for the theatre community. It is important that we let those in our industry know about the range of assistance we provide, including benefits advice and help with financial problems. We are a friendly and confidential first port of call for all involved in show business, not just performers.”