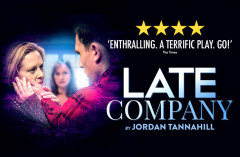 Following its critically acclaimed and sold-out European premiere at Finborough Theatre in April/May 2017, Stage Traffic’s production of Late Company, by the award-winning playwright Jordan Tannahill, will transfer for its West End debut at Trafalgar Studios 2 for a strictly limited run from 21 August – 16 September 2017, with press night on Thursday 24 August.

A successful middle-class couple’s lives are irrevocably changed after their teenage son is mercilessly bullied for being gay. In an attempt to “move on” they invite his chief tormentor, and his parents, to a dinner party.

Far from finding the peace they seek, the dinner strips bare their good intentions to reveal layers of parental, sexual, and political hypocrisy.

Written with sensitivity and humour, Late Company explores restorative justice, cyber bullying, and the ever-changing complexities of parenthood in the 21st century.

Jordan Tannahill, playwright said, “I wrote Late Company in the wake of an incident in my hometown of Ottawa, Canada that touched me deeply as a gay youth in my early twenties. It was a piece I intended to share with my group of friends; a means of venting anger and seeking some kind of reckoning. Never in my wildest dreams did I imagine it would make its way to West End. It is an honour to share this production with London audiences."

Proudly in support of the new production CEO of CALM (Campaign Against Living Miserably), Simon Gunning explains, “Late Company is a powerful play that centres around the highly difficult themes of bullying, suicide, sexuality, and family dynamics. These themes are insightfully handled; there is a sensitivity and awareness that does not shy away from a harsh reality. CALM is proud to support a show that starts the conversation of stigma surrounding mental health, as well as the dark side of social media and high-school hierarchy. Suicide is the biggest killer of young men in the UK, and those who are bereaved by suicide face a brutal journey. This confrontational play is beautifully cast, acted, and directed; and will certainly help to spread the word about the devastation of suicide.”

The production is directed by Michael Yale, with set and costumes by Zahra Mansouri, lighting by Nic Farman and sound by Chris Prosho. The full and original cast for Late Company will be reprising their roles in the production including Todd Boyce (Michael), David Leopold (Curtis), Alex Lowe (Bill), Lucy Robinson (Debora) and Lisa Stevenson (Tamara).