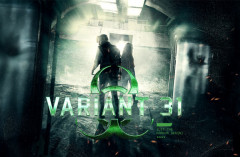 Dalton Dale, Artistic Director, Big Dreamer Productions and creator of Variant 31 said, “I wanted to create an incredible experience unlike anything that has been seen before, allowing audiences to really get involved in the production. What we've created here in Space 18 is the possibility for the future of theatrical entertainment to go further than it has ever gone before.

Everything inside is custom made specifically for this production, from the sets to the lighting, the music, and the technology and it gives me great pleasure knowing you can't see any part of this anywhere else on Earth.

We will also welcome other artists and companies to use our incredible asset for their own productions, and hope to help foster those relationships and creative innovations for years to come.”

Unlike traditional theatre, Dalton Dale and his co-producers wish to explore clever and innovative techniques to engage today's audiences who simply crave more than the traditional theatrical experience. By creating this ambitious new venue, they have provided a world of possibilities for audiences to fully immerse themselves and explore the colossal structure, which occupies an entire city block in the heart of London’s West End.

Variant 31 is a 90 minute long adrenaline-fuelled live-action game, in which players navigate through the expansive 25,000 square foot labyrinth. Once inside this immaculately detailed hidden world, the aim is simply to survive and escape. Work in teams to solve group challenges and play individually to complete personal objectives and puzzles to forge your own path to freedom. Those seeking safety in numbers are free to work together and find their way through the experience as a group.

Get off the couch, leave the video game behind and star in your own story.

Do you have what it takes to stay alive?

Welcome to Toxico Technologies’ top-secret live demonstration of their latest weapon in modern warfare, ‘Variant 31’; a serum so powerful it allows the user to control death itself.

The demonstration goes horribly awry and turmoil ensues as reanimated cadavers go on the warpath. Their sole mission is to hunt and destroy the invading enemy… you.

Do you have the skills and the stamina to overcome an array of terrifying creatures, and make it out alive? Or will the sheer terror be too much to handle….

Unleash the horror, choose your adventure and #AimForTheHead

Unlike any other immersive experience, audiences have the ability to traverse the massive arena however they so choose, utilizing custom-built state of the art wearable technology. Up, down, left and right - the journey you take through the apocalyptic world truly is your own; with over a thousand possible routes, no two adventures will be the same. From unlocking secrets, finding hidden passageways, interacting with characters in one-on-one experiences and piecing together the story for a narrative gaming experience that is uniquely your own.

In addition to Club Z, the game will feature four expertly themed bars, one in the beginning, and three within the game area. Each ticket includes a complimentary drink, which is redeemable at the start from the Serum Dispensary. We find partaking in a little liquid courage before the terror begins, helps to calm the nerves. Once inside the game, you may stop off at any of the three Quarantine check points as often as you’d like, take a breather, and recharge before you bolt back into the madness.

In addition to the incredible feat of creating and opening this new venue, and live action game, Dale is breathing new life to a world famous London treasure that has been closed for over a decade. Space 18 is partly comprised from the former nightclub The End, a location that was famous for it's music raves; featuring such performers as Fatboy Slim and The Scissor Sisters. Alongside Variant 31, the venue will reopen the club space as Club Z, where audiences can continue to delight in the immersive world; featuring immersive performers, stunning set design by Secret Cinema's Tim McQuillen-Wright, guest DJ's and a brand new first class cocktail menu.

With every admission to Variant 31, audience members get access to the one of a kind nightlife experience in Club Z, which will host themed nights, guest artists, burlesque and circus. Every part of this experience is a show. The walls move, the bar floats and the drinks bubble and flame like magic. Club Z will also be open to private parties, corporate events, birthday and hen/stag do celebrations.