by Best of Theatre Staff on Friday 18 March 2016, 9:53 am in Cast Changes and Announcements 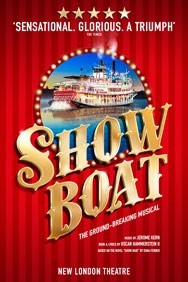 Daniel Evans’ sell-out Sheffield Crucible production of Show Boat transfers to the West End in April with the first preview at the New London Theatre on 9 April 2016 and press night on Monday 25 April 2016. Show Boat is booking to 7 January 2017.

Music is by Jerome Kern and book and lyrics by Oscar Hammerstein II based on the novel Show Boat by Edna Ferber. Designs are by Lez Brotherston with choreography by Alistair David, musical supervision and direction by David White, lighting by David Hersey, sound by Paul Groothuis and video design by Tim Reid.

Show Boat is produced in the West End by David Ian with Bob Bartner and Norman Tulchin.

One of the most romantic musicals of all time and set against the backdrop of America’s Deep South at the turn of the 20th Century, Show Boat tells a powerful story of freedom, loyalty and, above all love. Spanning 40 pivotal years in American history, this epic musical follows the lives and loves of three generations aboard the Cotton Blossom show boat as it plies the Mississippi River and features the timeless songs Ol’ Man River, Make Believe and Can’t Help Lovin’ Dat Man.

Malcolm Sinclair (Capt. Andy Hawks) has most recently been seen in The Meeting at Hampstead Theatre. His other extensive theatre credits include Temple, Ivanov and Privates on Parade for the Donmar Warehouse, Quartermaine’s Terms at Wyndham’s Theatre, The Doctor’s Dilemma, The Habit of Art, The Power of Yes, The History Boys, Luther, Richard III, House/Garden and Racing Demon, all for the National Theatre, Rosmersholm and Heartbreak House at the Almeida, Dealer’s Choice at the Menier Chocolate Factory, Journey’s End at the Playhouse Theatre and My Fair Lady at the Theatre Royal Drury Lane. His film credits include The Man Who Knew Infinity, Survivor, A Belfast Story, The Young Victoria, Casino Royale and V for Vendetta. On television his work includes Virtuoso, Tubby and Enid, Worricker, Silk, Henry V, Parade’s End and Midsomer Murders.

Chris Peluso (Gaylord Ravenal) has recently been seen at the Prince Edward Theatre playing Chris in Miss Saigon when he made his West End debut. Previously his Broadway credits include Beautiful The Carole King Musical, Assassins, Elton John’s Lestat and Mamma Mia! His other US theatre credits include The Glorious Ones at the Lincoln Center, Wicked on tour, West Side Story for the Barrington Stage Company, Les Misérables in Chicago, Bonnie and Clyde at La Jolla Playhouse, Romeo and Juliet at the Gulfshore Playhouse and Miss Saigon at the Music Theatre, Wichita.

Gina Beck’s (Magnolia Hawks) theatre credits include the role of Glinda in Wicked both in the West End and on tour in the US, Christine in The Phantom of the Opera at Her Majesty’s Theatre and Cosette in Les Misérables at the Queen’s Theatre, Far From The Madding Crowd at The Watermill Theatre, The Kissing Dance at the Jermyn Street Theatre, I Love You , You're Perfect, Now Change at the Arts Theatre Upstairs, Jacques Brel is Alive and Well and Living in Paris at the Charing Cross Theatre, The Belle’s Stratagem at Southwark Playhouse, Peter Pan for Birmingham Rep and Imagine This for Plymouth Theatre Royal. On television, her work includes Doctors, The Return of Sherlock Holmes, The Crust and Dogma and on film, Les Misérables. Beck performed The Phantom of the Opera duet at Andrew Lloyd Webber's 60th birthday concert in Hyde Park and also performed as a soloist in the 25th Anniversary Concert of Les Misérables at the O2 arena.

Lucy Briers’ (Parthy) theatre credits include The Seagull and Ivanov for Chichester Festival Theatre, Wolf Hall and Bring Up the Bodies for the Royal Shakespeare Company at the Aldwych Theatre and on Broadway, Top Girls for Chichester Festival Theatre/Duke of York’s Theatre/Out of Joint, Behud for Soho Theatre, Bedroom Farce and Miss Julie at the Rose Theatre, Kingston, Ivanov at the Donmar Warehouse, Sexual Perversity in Chicago for Norwich Theatre Royal, Some Kind of Bliss at Trafalgar Studios/Brits off Broadway, Catch for the Royal Court Theatre and The Voysey Inheritance for the National Theatre. On television her work includes Count Arthur Strong, Our Girl, Dark Matters, DCI Banks, The Thick of It, Twenty Twelve, Ashes to Ashes, Einstein and Eddington, The Green Green Grass, Bodies, Fathers and Sons, Shadow Play, Wives and Daughters, Pride and Prejudice, Brittas Empire and Red Dwarf, and on film, Genius, Alan Partridge: Alpha Papa, The Children of Men and Perks.

Rebecca Trehearn’s (Julie La Verne) theatre credits include Alfie the Musical at the Palace Theatre, Watford, We Will Rock You at the Dominion Theatre, Dirty Dancing at the Aldwych Theatre, Aspects of Love at the Menier Chocolate Factory, Love Story at the Duchess Theatre, Bernarda Alba at the Union Theatre, Ghost on UK national tour, Dogfight at Southwark Playhouse and City of Angels at the Donmar Warehouse. On television her credits are Casualty, A470 and Dim Ond Y Gwir.

Emmanuel Kojo’s (Joe) theatre credits include Kiss Me Kate on tour in the UK tour and Scottsboro Boys at the Garrick Theatre.

Sandra Marvin’s (Queenie) theatre credits include City of Angels at the Donmar Warehouse, Hairspray at the Shaftesbury Theatre and on tour in the UK and Ireland, Chicago at Leicester Curve, Ragtime and A Midsummer Night’s Dream for Regent’s Park Open Air Theatre, Porgy and Bess at the Savoy Theatre, The New Yorkers at Sadler’s Wells, Cool Hand Luke at Aldwych Theatre and A Rake’s Progress at the Royal Opera House. Her film credits include the upcoming Florence Foster Jenkins. Marvin has performed with Kate Bush in Before the Dawn, her 22 date residency at the Eventim Hammersmith Apollo, and she also recorded vocals for The Charlatans new album, Modern Nature, and last year joined them on their 2015 tour.

Alex Young’s (Ellie May Chipley) theatre credits include Bette Midler and Me at The Gilded Balloon, Edinburgh Fringe, Anything Goes for Sheffield Crucible and on tour in the UK, I Can’t Sing at the London Palladium, High Society on tour in the UK tour, The Sound of Music at Kilworth House and Femme Fatale at Upstairs at the Gatehouse.

Danny Collins’ (Frank Schultz) theatre credits include Matthew Bourne's The Car Man, Edward Scissorhands, Sleeping Beauty, Play Without Words, Nutcracker!, Cinderella and Swan Lake. His other theatre credits include Kiss Me Kate for the Proms at the Royal Albert Hall, Drunk at The Bridewell Theatre, Slaughter! and Be Mine for the McOnie Company, Dance:Radio at The Roundhouse, London and Latitude Festival, On The Town at Théâtre du Châtelet, Paris and The Coliseum with the ENO, London, Sinatra on tour in the UK, The Wizard of Oz at the Southampton Mayflower and La Traviata at Birmingham Opera Company. His film and television credits include Matthew Bourne’s Christmas and Search for John Gissing.

Multi award-winning Daniel Evans took over as Artistic Director of Sheffield Theatres in 2009 and in June this year he steps down to take over as Artistic Director of Chichester Festival Theatre. As a director at Sheffield Theatres his productions include The Effect, Anything Goes, Oliver!, This Is My Family, The Full Monty, My Fair Lady, Macbeth, Othello, Racing Demon as part of The David Hare Season and An Enemy of the People – the opening production of his inaugural season. As an actor, his work for the company includes Company, The Pride, Cloud Nine and The Tempest. An award-winning actor and director, Evans’ work includes Sunday in the Park with George for the Menier Chocolate Factory, Wyndham’s Theatre and on Broadway - a role for which he won his second Olivier Award for Best Actor in a Musical and a Tony Award nomination. His additional extensive credits include work with the Donmar Warehouse, Royal Shakespeare Company, Royal Court Theatre and National Theatre. Evans is a Fellow of the Guildhall School of Music and Drama.