by Best of Theatre Staff on Tuesday 10 September 2019, 10:16 am in Cast Changes and Announcements 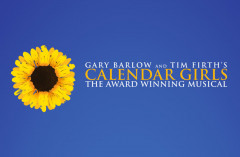 Gary Barlow and Tim Firth are delighted to be able to welcome back Ruth Madoc, who returns to play the role of Jessie in the autumn tour of CALENDAR GIRLS The Musical. Ruth has made a full recovery following an injury earlier this year: “I’m a fighter and I’m back in this wonderful show and I can’t think of anywhere else I’d rather be.”

Following a summer break, CALENDAR GIRLS The Musical, based on the true story, the film and the award-winning play, will open at Bournemouth Pavilion on 17 September, with the tour ending on 23 November at Chichester Festival Theatre.

Ruth joins current cast members Sarah Jane Buckley (Blood Brothers and Kathy Barnes in Hollyoaks) as Annie, Sue Devaney (Years and Years on BBC 1, Jane in Dinnerladies, Liz Harker in Casualty, Debbie Webster in Coronation Street and Rosie in the musical Mamma Mia!) as Cora, Julia Hills (Doctor Kemp in Broadchurch, Annabelle Shrivener in The Archers) as Ruth, Judy Holt (Cold Feet, Scott & Bailey) as Marie, Lisa Maxwell (panellist on Loose Women, Tracey Donovan in Hollyoaks, Samantha Nixon in The Bill and various roles in The Les Dennis Laughter Show and The Russ Abbot Show) as Celia and Rebecca Storm (discovered by Willy Russell and cast as Mrs Johnstone in Blood Brothers, and her handprints are part of the Dublin’s Gaiety Theatre Walk of Fame) as Chris.

The critically acclaimed and award-winning production played a six-month London season at the Phoenix Theatre in 2017, and, before that, this musical comedy played sold-out seasons in Leeds and Manchester.

Gary Barlow and Tim Firth grew up in the same village in the North of England and have been friends for 25 years. With Take That, Gary has written and co-written 14 number one singles, has sold over 50 million records worldwide and is a six times Ivor Novello Award winner. Tim has won the Olivier Award and UK Theatre Award for Best New Musical, and the British Comedy Awards Best Comedy Film for Calendar Girls.

CALENDAR GIRLS THE MUSICAL is inspired by the true story of a group of ladies, who decide to appear nude for a Women’s Institute calendar in order to raise funds to buy a settee for their local hospital, in memory of one of their husbands, and have to date raised almost £5million for Bloodwise. This musical comedy shows life in their Yorkshire village, how it happened, the effect on husbands, sons and daughters, and how a group of ordinary ladies achieved something extraordinary.

Bloodwise, the UK’s specialist blood cancer charity, will continue to receive monies from this production.

CALENDAR GIRLS The Musical is directed by Matt Ryan and designed by Robert Jones, with comedy staging by Jos Houben, movement by Lucy Hind and casting by Sarah Bird.