Cast announced for RUTHLESS! THE MUSICAL - Tickets now on sale 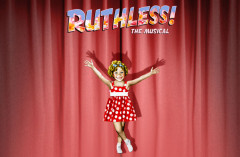 The musical has played Off Broadway to critical acclaim over the past 25 years. This brand new production, directed by Richard Fitch, opens on 27 March, with previews from 16 March, and runs until 23 June.

How far would you go to get what you want?

Ruthless! The Musical tells the story of the beautiful and talented 8 year old Tina Denmark who will do anything to play the lead in her school play… ANYTHING!

Ruthless! started Off-Broadway 25 years ago and discovered young performers including Britney Spears and Natalie Portman. The show famously spoofs Broadway musicals from Gypsy to Mame as well as iconic films including The Bad Seed and All About Eve.

Jason Gardiner plays Sylvia St. Croix. Originally from Melbourne, he is a television broadcaster, performer and choreographer – he is currently a judge in the popular ITV series Dancing on Ice. He began his professional career in the original Australian cast of 42nd Street at the age of 16, and has since gone on to perform in over 20 award-winning musicals including West Side Story, Cats, Dames At Sea, Oklahoma, Anything Goes, Chicago, Pippin and My Fair Lady. As a choreographer he has worked with some of the industry’s biggest names including Pink, Dame Shirley Bassey, Kylie, Cher, Bjork, Roseanne Barr and Sir Elton John. His choreography received critical praise for the Raindance Film Festival favourite, Meet Pursuit Delange. His other television presenting roles have included ITV’sThis Morning as their fashion presenter, culture expert on Queer Eye for the Straight Guy UK, a permanent panellist on Ultimate Shopper for TLC Network and the UK presenter on Red Carpet Moments for E! Entertainment.

Kim Maresca plays Judy Denmark, reprising the role she played Off Broadway in the most recent run of Ruthless! The Musical. She recently played her fifth sold-out engagement of her one-woman show at Feinstein's/54 Below. Regional: Twelfth Night (Westport Country Playhouse), Biondella in The Taming of the Shrew (Saratoga Shakespeare Company) and Maureen in Rent (Thomaston Opera House).

The Menier Chocolate Factory will act as Executive Producer and General Manager for the UK première.