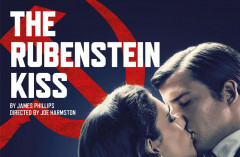 Devil You Know Theatre Company is delighted to announce the first London production since 2005 of the multi-award winning play THE RUBENSTEIN KISS by James Phillips, opening at Southwark Playhouse for a limited 4-week run from 14 March 2019, directed by Joe Harmston. There will be a national press night on 18 March 2019.

James Phillips’s first staged play, The Little Fir Tree, was commissioned by and performed, under his direction, at the Sheffield Crucible in 2004. Some of his other work includes Hidden in the Sand (Trafalgar Studios), McQueen (St James Theatre and Theatre Royal Haymarket), City Stories (St James Theatre and 59E59 Theaters, New York) and Flood, which premiered as part of Hull UK City of Culture in 2017.

Joe Harmston has directed over 100 productions in London‘s West End, various regional theatres including Chichester Festival Theatre and Belgrade Theatre Coventry, as well as multiple No.1 UK and International Tours. Career highlights include his productions of The Lover and The Collection at Donmar Warehouse starring Harold Pinter. His other West End credits include, The Birthday Party, A Talent to Amuse and Wait Until Dark. Joe was nominated by the TMA as Best Director for his 2012 production of Strindberg’s The Father at Belgrade Theatre, Coventry.

James Phillips said, “I’m incredibly excited to see Joe Harmston’s new production of THE RUBENSTEIN KISS. Our current, dangerous, fraught political moment - where so many are trying again to test the limits of political idealism, where we read daily of Russian agents in this country and in the United States - seems a perfect time to revive the play.”

THE RUBENSTEIN KISS is the story of the Rubensteins, a deeply devoted Jewish couple whose Communist idealism leads to their world being torn apart by suspicion and treachery which then echoes through the generations. Phillips's explosive and affecting drama, inspired by the haunting true story of Ethel and Julius Rosenberg, who were executed in 1953 for allegedly providing atomic secrets to the Soviet Union, is the study of conspiracy, betrayal, and guilt.

THE RUBENSTEIN KISS was originally staged in 2005 at Hampstead Theatre starring Gary Kemp and Samantha Bond, winning the John Whiting Award and the TMA Award for Best New Play.