by Best of Theatre Staff on Tuesday 15 January 2019, 10:10 am in Cast Changes and Announcements 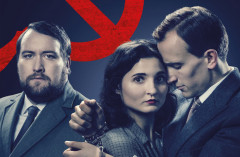 Devil You Know Theatre Company are delighted to announce full casting for the first London production since 2005 of the multi-award winning play THE RUBENSTEIN KISS by James Phillips.

Sean Ribgy will play David Girshfeld. Sean has starred as DS Jim Strange in ITV’s Endeavour since 2013, and is also known for his role as Lord Monteagle in the BBC drama Gunpowder. His theatre credits include Pomona (National Theatre, Orange Tree Richmond), Table Talk (Short Back And Sides), and Still Life And Red Peppers (Folie a Deux Productions).

Completing the cast are Katie Eldred as Anna, and Eva-Jane Willis as Rachel Girshfeld.

Directed by Joe Harmston (The Lover and The Collection, Donmar Warehouse; The Father, Belgrade Theatre, Coventry) this new production will play for a limited season at Southwark Playhouse from 14 March to 13 April 2019, with a national press night on Monday 18 March.

James Phillips said, “I’m thrilled about Joe Harmston’s new production of The Rubenstein Kiss, and I can’t wait to see the exciting new generation of actors he’s assembled in these roles I love. Our current, dangerous, fraught political moment - where so many are trying again to test the limits of political idealism, where we read daily of Russian agents in this country and in the United States - seems a perfect time from him to revive the play.”

THE RUBENSTEIN KISS is the story of the Rubensteins, a deeply devoted Jewish couple whose Communist idealism leads to their world being torn apart by suspicion and treachery which then echoes through the generations. Phillips's explosive and affecting drama, inspired by the haunting true story of Ethel and Julius Rosenberg, who were executed in 1953 for allegedly providing atomic secrets to the Soviet Union, is the study of conspiracy, betrayal, and guilt.

THE RUBENSTEIN KISS was originally staged in 2005 at Hampstead Theatre starring Gary Kemp and Samantha Bond, winning the John Whiting Award and the TMA Award for Best New Play.