Rehearsals Begin for Julius Caesar at the Bridge Theatre 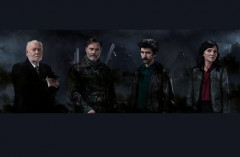 Julius Caesar runs from 20 January to 15 April 2018, with opening night on Tuesday 30 January 2018. Designs are by Bunny Christie, with costumes by Christina Cunningham, music by Nick Powell, lighting by Bruno Poet and sound by Paul Arditti.

Caesar returns in triumph to Rome and the people pour out of their homes to celebrate. Alarmed by the autocrat's popularity, the educated élite conspire to bring him down. After his assassination, civil war erupts on the streets of the capital.

Hytner’s production will be in promenade, thrusting its audience into the street party that greets Caesar's return, the congress that witnesses his murder, the rally that assembles for his funeral and the chaos that explodes in its wake. With seating wrapped around the action, there will also be several hundred promenading tickets at £25 available in advance for each performance.

Julius Caesar will be broadcast on National Theatre Live on 22 March 2018.

David Calder was last on stage in The Intelligent Homosexual’s Guide to Capitalism and Socialism with a Key to the Scriptures at Hampstead Theatre. His other theatre credits include The Nether at Duke of York’s Theatre, The Audience at the Apollo Theatre, The Doctor’s Dilemma and Hamlet at the National Theatre, King Lear at Shakespeare’s Globe, Rock ‘n’ Roll at Duke of York’s Theatre, Five Gold Rings at the Almeida Theatre, The Drawer Boy at the Abbey Dublin, The Little Foxes at the Donmar Warehouse, The Tempest, Twelfth Night, King Lear, The Merchant of Venice, Moscow Gold for the Royal Shakespeare Company and The Price and Othello for The Young Vic.

Michelle Fairley was last seen on stage in Road at the Royal Court, where she also appeared in Oleanna, Remembrance Day, Loyal Women and The Weir, which was later seen on Broadway. Her other theatre credits include Splendour, Othello and The Wild Duck for the Donmar Warehouse, Dancing at Lughnasa at the Old Vic, Huis Clos and Gates of Gold at the Trafalgar Studios and Scenes from the Big Picture at the National Theatre.

David Morrissey’s most recent theatre credits include Hangmen at the Royal Court and subsequently Wyndham’s Theatre, Macbeth for the Liverpool Everyman, In a Dark Dark House for the Almeida Theatre, Three Days of Rain for the Donmar Warehouse, Peer Gynt for the National Theatre, The Cabinet Minister at the Royal Exchange, Manchester and El Cid and WC/PC for the Liverpool Playhouse. For the Royal Shakespeare Company his credits are King John, Henry VI, Edward IV and Richard III.

Ben Whishaw was last seen on stage in The Crucible at the Walter Kerr Theatre on Broadway. His other theatre credits include Bakkhai for the Almeida Theatre, Mojo at the Harold Pinter Theatre, Peter and Alice at the Noël Coward, The Pride at the Lucille Lortel Theatre off Broadway, Cock at the Royal Court, Leaves of Glass at the Soho Theatre, Mercury Fur for Paines Plough and Hamlet at the Old Vic, as well as The Seagull, Some Trace of Her and His Dark Materials all for the National Theatre, the latter directed by Nicholas Hytner.

Nicholas Hytner was Director of the National Theatre from 2003 to 2015, where the productions he directed included The History Boys, Hamlet, One Man, Two Guvnors, and Othello. His films include The Madness of King George. His book Balancing Acts was published by Jonathan Cape on 27 April. Hytner directed Young Marx, the opening production the Bridge.