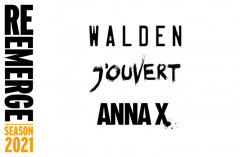 Following a year of extraordinary challenges, and as British theatre begins to find ways to re-emerge from the devastating impact of the enforced shutdown, SFP today announces a season of new plays for a new world at the Harold Pinter Theatre. The RE:EMERGE season will create a space for vital, new voices and fresh talent in the West End and beyond, working alongside some of the industry’s greatest theatremakers and artists. The extraordinary collection of plays curated by SFP alongside Ian Rickson – who becomes Artistic Director for the season - tackles urgent issues integral to rebuilding our society, including structural inequality, climate change and the economics of truth in an internet age. Supported by Arts Council England, RE:EMERGE will support the theatre-makers of the future, provide vital work for the freelance community and celebrate the live experience as we begin to build back to the full reopening of British Theatre.

The RE:EMERGE season intends to open to socially-distanced audiences from May to help
re-open and re-energise our theatres, and will be staged in a Covid safe environment following government advice and adhering to social distancing guidelines; and in line with Society of London Theatre & UK Theatre's See It Safely campaign. Alongside the season, SFP also intends for the comedy The Comeback to return to the West End following its enforced shutdown in December.

Announced today as part SFP’s RE:EMERGE season so far is:

SFP plans to open the season in May in line with the government’s roadmap. Further information regarding performance and on-sale dates will be released in the coming weeks. Tickets for the previews will be priced from £5, and from £10 for the runs post press night, with a top price ticket of £49.50. There will be 600 tickets each week priced under £15.

There is intention for all three productions to be filmed for a future broadcast life, with J’OUVERT being shown on BBC Four as part ofBBC Lights Up - a season of plays for BBC radio and TV, produced in partnership with theatres across the UK and continuing BBC Arts’ Culture in Quarantine initiative.

Sonia Friedman said today, After what has been such a devastating year for so many it fills me with the greatest joy and hope to announce RE:EMERGE, an SFP Season of bold, new work for a bold, new world as we begin to build back to the full reopening of British Theatre.

“Yasmin Joseph’s J’OUVERT, first seen at Theatre503 and currently in rehearsals to be filmed for the BBC, reveals Notting Hill Carnival through the eyes of two best friends navigating the joys and dangers of young Black womanhood in 21st Century Britain. Whilst Amy Berryman’s WALDEN depicts the intensity of familial love and loss as the climate emergency encroaches ever closer, Joseph Charlton’s ANNA X delves deep into the corruption of truth and reality through the all-consuming lies we tell the world about ourselves over social media. These extraordinary plays, each one with a distinct and powerful voice, will thrill, move and delight audiences.

“We hope that the RE:EMERGE Season will help the immense effort being made across our industry to reopen our theatres, with the most exciting, new talent working in tandem with some of our greatest theatre makers and artists. And this is just the beginning – we have so much more to come.

“We are deeply thankful for the commitment of all the extraordinary group of writers, actors, directors, designers, stage managers, technicians and theatre makers who have agreed to be a part of this season – just when theatre needs them most. I am also incredibly grateful to Ian Rickson, one of my closest and most dedicated long-time collaborators, for his vision and co-curation of this Season. And my thanks must also extend to my incredibly committed team, who have worked so passionately under very challenging circumstances to help bring this season of work together. I would also like to thank Arts Council England, whose support has made RE:EMERGE possible. After an incredibly difficult year, I cannot wait for us all to ‘re-emerge’ from our homes and return to the theatre, where together we can be entertained, enthralled, challenged and dazzled by these astonishing works.”