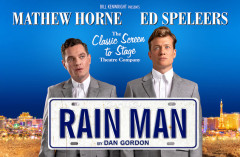 Mathew Horne is best known for playing Gavin in the much-loved, double BAFTA winning comedy series Gavin and Stacey,as well as the BBC series The Catherine Tate Show, and Jack Whitehall’s Bad Education. His most recent West End stage credit was The Miseropposite Griff Rhys Jones and Lee Mack. Ed Speleers starred as Jimmy Kent in the Golden Globe award winning series Downton Abbey. His breakthrough came after landing the lead role in the fantasyblockbusterEragon, since then he has starred in many films and TV series and has just been announced as joining the cast of Outlander.

Ed will be making his stage debut in Rain Man.

Jonathan was selected as one of the Guardian’s Rising Stage Stars of 2014.