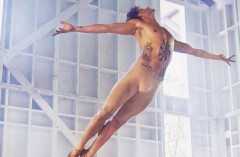 Ukrainian ballet star Sergei Polunin’s company, Project Polunin, will present a mixed programme of new and revived work at the London Coliseum from 5 to 10 December 2017. The programme will feature an international cast and creative team, including Polunin himself. Full casting and details of the programme are to be announced later this year.

At 19, Sergei Polunin was the youngest ever dancer to become a Principal with The Royal Ballet. After four years in the company, he went on to perform in Russia with the Stanislavsky Theatre and Novosibirsk Opera and Ballet Theatre. Earlier this year, Sergei's story was made the subject of documentary feature film Dancer produced by Gabrielle Tana. The documentary is book-ended with Sergei's Take Me To Church video, directed by David LaChapelle, which has now amassed nearly 20 million views. Later this year, Sergei will be seen in the new Kenneth Branagh film adaptation of Murder on the Orient Express, due for release in November.

With Project Polunin, Sergei aims to create new dance and ballet works for both stage and film, through the collaboration between dancers, contemporary artists, musicians and choreographers from all creative backgrounds. Project Polunin will strive to make dance accessible to people of all ages and incomes, and to inspire, nurture and support young people to be more creative.

Project Polunin is produced in collaboration with David Banks and Gabrielle Tana.