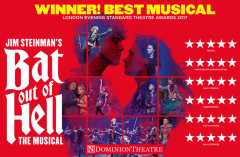 Bat Out Of Hell - The Musical's lead Andrew Polec, who plays the character of 'forever young' Strat, is leaving the West End production of the show. Polec, who won the 'Joe Allen Best West End Debut' in the Stage Debut Awards 2017 for his performance as Strat, has been involved in the show since the beginning. He commented:

"Bat Out of Hell - The Musical has changed my life - it’s a true gift. I've never felt so warmly welcomed and loved by so many thoughtful, generous people who hold Jim Steinman and Meat’s music so close to their hearts. It's been an honour being part of this show, and phenomenal to work with this amazing cast and team. Plus - I get to sing this brilliant music night after night for the best fans in the world!

“During the Dominion’s first preview, we were met with a full standing ovation. As I walked onto the stage, I thought the roof of the theatre was going to blow off. As Steinman says ‘I was lost, till you were found’. ‘For Crying Out Loud’, I love you all and I’ll miss you dearly. I’m eternally grateful, thank you. Keep rocking and loving - I will always carry you in my heart." - Andrew Polec

Bat Out Of Hell – The Musical wowed critics and public alike when it played limited seasons at Manchester Opera House, London Coliseum and Toronto’s Ed Mirvish Theatre in 2017, and has been seen by over 650,000 people to date. It began previews at its latest home the legendary Dominion Theatre on Monday 2 April, with a gala performance on 19t April 2018. It is now booking through to 5 January 2019.

Andrew Polec's final show starring in the UK version of the musical at The Dominion, London will be on Saturday 1 September 2018. Tickets are available here. More exciting news about Andrew will be announced shortly and his replacement will be announced in the coming days.

Jim Steinman’s Bat Out Of Hell – The Musical is a romantic adventure about rebellious youth and passionate love, set against the backdrop of a post-cataclysmic city adrift from the mainland. Strat, the forever young leader of The Lost, has fallen for Raven, daughter of Falco, the tyrannical, ruler of Obsidian. It scooped the 'Evening Standard Radio 2 Audience Award' for Best Musical in 2017.