THE PHANTOM OF THE OPERA UK and Ireland Tour 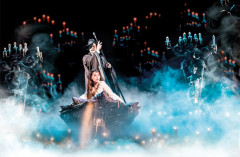 Andrew Lloyd Webber and Cameron Mackintosh are delighted to announce a UK and Ireland tour of the brilliant original production of THE PHANTOM OF THE OPERA opening at Curve, Leicester on 24 February 2020 where it will run until 21 March 2020 ahead of visiting Manchester Palace Theatre (26 March - 30 May 2020), Bord Gais Energy Theatre Dublin (10 June – 18 July 2020), Birmingham Hippodrome (29 July – 12 September 2020) and Edinburgh Festival Theatre (23 September - 31 October 2020). Venue details and on sale dates below. Further dates and full casting to be announced soon.

Now in its 33rd phenomenal year in the West End, THE PHANTOM OF THE OPERA is widely considered one of the most beautiful and spectacular productions in history. Andrew Lloyd Webber’s romantic, haunting and soaring score includes Music of the Night, All I Ask of You, Masquerade and the iconic title song.

THE PHANTOM OF THE OPERA is currently showing in London, New York, Prague and Sao Paulo, as well as on tour in the US and Asia.