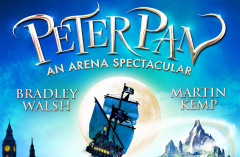 For the first time ever, The World’s Biggest Pantomime Ltd will play in London, presenting PETER PAN, a stunning new arena spectacular, at The SSE Arena, Wembley for four performances only, on Friday 29 and Saturday 30 December 2017.

Starring Bradley Walsh as Mr Smee, Martin Kemp as Captain Hook, and Matt Knight as Peter Pan, J.M. Barrie’s original story and characters will be brought to life by a cast of over 100 performers, including a thrilling team of BMX riders, stuntmen and trapeze artists, along with a 7m-long animatronic crocodile! This amazing new show will be performed across three arena stages on a stunning movie-style Neverland set. The Jolly Roger galleon will sail around the arena in front of a 10,000-gallon water wall. Wherever someone is seated, they will be close to the action with a giant 60 feet-wide LED screen, computer graphic imagery and a live close-up TV-relay ensuring never a moment is missed.

Bradley Walsh’s acting credits include DS Ronnie Brooks in Law & Order: UK, Danny Baldwin in Coronation Street (won Best Actor at The Royal Television Society Awards) and Dave Dodds in the feature film Mike Bassett: England Manager. As a presenter, his shows have included, most recently, ITV’s The Chase and Tonight at the London Palladium. In November 2016, he released his debut album, Chasing Dreams, which became the biggest-selling debut album by a British artist in 2016.

Bradley said, “I’m so excited to be appearing in PETER PAN. It really is an extraordinary production, the like of which Wembley has never seen before! It has a life-size galleon, a twenty-five-foot crocodile, plus a cast of over a hundred! It’s a big, bold arena extravaganza and festive treat with something for everyone.”

Martin Kemp’s acting credits include Reggie Kray alongside his brother Gary as Ronnie Kray in the film The Krays, Steve Owen in EastEnders, Sam Phillips in the UK tour of Million Dollar Quartet and The Child Catcher in the UK tour of Chitty Chitty Bang Bang. He is also, of course, one quarter of the band Spandau Ballet, and his book, True – An Autobiography of Martin Kemp, spent several months in The Sunday Times best sellers list. He also appeared as a judge on the BBC’s Let It Shine, alongside Dannii Minogue and Gary Barlow.

Martin said “What an amazing opportunity to be playing Captain Cook at Wembley Arena this Christmas! I can’t wait to work with all these wonderfully talented actors, stuntmen and trapeze artists and I know the audience is going to be treated to a real visual feast."

Matt Knight was in the band Iron Sun, who were semi-finalists in the BBC entertainment series Let It Shine.

Prior to London, PETER PAN An Arena Spectacular will appear at the Barclaycard Arena, Birmingham from 20 to 24 December 2017.