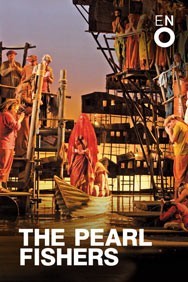 I’ve seen the power of the ocean represented by English National Opera very successfully, on the stage of the Coliseum, several times in recent years. First there were the surging projections of the ocean surrounding a little girls bedroom in the overture to The Flying Dutchman which culminated in a full size sailing ship smashing through the back wall of the set to deliver our sinister hero to the maidens of a northern fishing town. Then there was the beautiful sea music that punctuates Benjamin Britten’s seaside child abuse melodrama, Peter Grimes. But with the stunning opening to The Pear Fishers the ENO production team have surpassed themselves.

With the stunning opening to The Pear Fishers the ENO production team have surpassed themselves.

As the lights go down and the air is filled with Bizet’s sumptuous music two pearl fishers appear to dive and weave deep beneath the ocean as they carry out their dangerous job of collecting pearls from the sea bed. They seem to effortlessly swoop through the water even though they must be held up by wires and pulleys. It’s a spectacular opening to a truly lavish production of a richly romantic tale.

When the curtain eventually rises on the main action it feels like, designer Dick Bird and director Penny Woolcock have brought an entire Srilanken fishing village on to the stage, swarming over a huge rickety construction that seems to have risen out of the shimmering water represented by a reflective flooring.

It is here that we first meet our main characters, two best friends, Nadir and Zurga and, unusually for opera they’re played by two young and handsome singers, John Tessier and George von Bergen respectively.

Their beautiful bro-mantic duet is one of the most intoxicating moments in classical opera and the reason why this piece, from the author of Carmen, is regularly revived. However a woman is about to come between them in the form of the beautiful priestess Leila.

Both men are besotted and it’s easy to see and hear why. Before the press night the ENO’s head of casting took to the stage to warn us that the gorgeous singer Sophi Bevan was performing this role despite being weak from a stomach bug. Her singing was then so glorious that it’s hard to imagine how she’d sing it any better in full health.

As resident priestess at a shrine that protects the pearl fishers from the elements with her prayers she’s forbidden love so when Nadir breaks in to seduce her both are in big trouble especially since justice is dealt out by Zurga in his position as community leader, he too has long loved Leila but from afar.

As their passions soar it’s reflected in nature’s behaviour and the production employs billowing silks to portray the stormy water that builds into a very convincing tsunami.The rage of the water seems to be reflected in the anger of the high priest and villagers and the passionate music. When the squall is over the set becomes still and tranquil again but there is a new tension in the air as Zurga decides what must be done about the disobedient lovers.

His office seems to be located in the rusting metal hold of some vast container-ship. This is typical of the directors approach through out. She sets an oriental, timeless beauty alongside the harsh realities of modern life. For instance the picturesque fishing village full of colourful peasants in saris and smocks is juxtaposed with an ugly bill board at the back selling a westernised vision of the very pearls that the characters risk their lives to harvest. When we next see it it’s been battered by the waves but still forms a harsh, commercial backdrop to every romantic deed the protagonists do.

There isn’t a lot of action in the story, which is basically boy meets girl, boy and girl are punished by his best mate but Bizet’s expressive score brings enormous beauty and complexity to the lover's passions and dilemmas, even when the action stops for long periods of time while they deliberate.

As usual the ENO harness a huge and majestic sounding orchestra. Take your heart’s desire along to see it and luxuriate in the gorgeous production values, sumptuous orchestrations and beautiful singing that has class written all over it.

This staging is a co-production between our London opera house and the Met in New York and represents some of the best design work of both companies.