by Best of Theatre Staff on Wednesday 28 August 2019, 1:48 pm in Cast Changes and Announcements 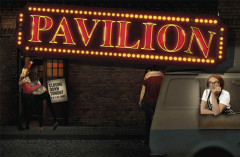 Friday night. Music pounds, lager flows, lust ignites and fists fly. This run-down spa town in a forgotten corner of Wales is filled with big personalities and even bigger egos.

Pavilion is Emily White’s debut play. She originally trained as an actress at RADA, before obtaining an MA in Theatre Writing at York University. In 2018 she won a place on Channel 4’s 4Screenwriting Course and this year she was selected to be part of the BBC Wales Writersroom group. She is currently writing a digital theatre piece for Wrapt Films/Open Sky Theatre and is also developing projects for TV, radio, theatre and film.

Ifan Huw Dafydd playsDewi. His previous theatre credits for Theatr Clwyd include Under Milk Wood, As You Like It, Blackthorn, Festen, History of Falling Things, The Draw Boy, Memory, The Crucible and King Lear. Other theatre credits include The Wood (Torch Theatre), Raving (Hampstead Theatre), Desire Line (Sherman Theatre), and An Enemy For The People (Chapter Arts Centre). For television, his credits include The Light, 4 Stories: On The Edge, Pitching In, 15 Daysand The Crown.

Carly-Sophia Davies plays Jess. She graduated from LAMDA in 2018. Her credits include A Midsummer Night’s Dream and I Love You, You’re Perfect, Now Change (Taliesin Theatre).

Caitlin Drake plays Myfanwy. She graduated from Italia Conti in 2019. This marks her professional debut.

Michael Geary plays Evan. His previous credits for Theatr Clwyd include My People, The Light of Heart, Rape of the Fair Country, As You Like It, Humbug, Taking Steps, The Taming of the Shrew, A Child’s History in Wales, Tall Tales, Thinking Out Loud, Festen, A Midsummer Night’s Dream, Tales from Small Nations and The Suicide. Other theatre credits include The Boy Who Fell into a Book (Soho Theatre), The Merry Wives of Windsor (Guildford Shakespeare Company) and Fantastic Mr Fox (Regent’s Park Open Air Theatre). For film, his credits include Viking Siege, Tulip Fever and The Baker.

Victoria John plays Big Nell. Her previous credits for Theatr Clwyd include Wave Me Goodbye, The Rise and Fall of Little Voice, Cyrano de Bergerac, All My Sons, The Light of Heart, Aristocrats, The Winslow Boy, Rape of the Fair Countryand Boeing Boeing. Other theatre credits include Hir (Bush Theatre), Play (The Other Room)and The Frozen Scream (Wales Millennium Centre, Birmingham Hippodrome). For television, her credits include Gwaith/Cartref, Miranda, Cast Offs and Little Britain.

Tamara Harvey has been Artistic Director of Theatr Clwyd since August 2015. Most recently she directed Orpheus Descending in a co-production with the Menier Chocolate Factory and the première of Home, I’m Darling by Laura Wade – which has been nominated for UK Theatre and Evening Standard Awards, as well as five Olivier Awards, winning the Olivier for Best New Comedy, and recently transferred to the West End before returning to Clwyd. Also for the company she has directed Much Ado About Nothing, the première of Elinor Cook’s award-winning play, Pilgrims, Skylight by David Hare and the première of Peter Gill’s version of Uncle Vanya (Best Production, Best Supporting Actress and Best Director in the English Language at the Wales Theatre Awards). She has directed in the West End, throughout the UK and abroad, working on classic plays, new writing, musical theatre and in film. Her previous credits include the world premières of From Here to Eternity (Shaftesbury Theatre), Breeders (St James Theatre), The Kitchen Sink, The Contingency Plan, Sixty-Six Books and tHe dYsFUnCKshOnalZ! (Bush Theatre), In the Vale of Health (a cycle of four plays by Simon Gray), Elephants and Hello/Goodbye (Hampstead Theatre), Plague Over England (Finborough Theatre & West End). Other theatre includes Kreutzer vs Kreutzer (Sam Wanamaker Playhouse/Royal Festival Hall), Bash (Trafalgar Studios), Whipping It Up (New Ambassadors), One Flew Over the Cuckoo’s Nest (Gielgud & Garrick Theatres), Educating Rita (Menier Chocolate Factory & Theatre Royal Bath), the UK première of Something Cloudy, Something Clear (Finborough Theatre) and Pride and Prejudice (Sheffield Theatres).