Full Cast Announced for THE OSMONDS: A NEW MUSICAL

by Best of Theatre Staff on Tuesday 11 January 2022, 10:14 am in Cast Changes and Announcements 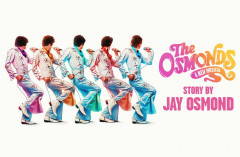 Georgia Lennon, Charlie Allen, and Nicola Bryan will play Marie, George, and Olive Osmond respectively in the World Premiere of The Osmonds: A New Musical, joining the previously announced Ryan Anderson as Merrill Osmond, Jamie Chatterton as Alan Osmond, Alex Lodge as Jay Osmond, Danny Nattrass as Wayne Osmond, and Joseph Peacock as Donny Osmond. The UK & Ireland Tour begins at Curve, Leicester on 3 February 2022 and will run through to 3 December 2022.

Georgia Lennon trained at Laine Theatre Arts, graduating in 2020. Her theatre credits include: Lady Chatterley in the world premiere of Lady Chatterley’s Lover (Shaftesbury Theatre); One Enchanted Evening (Glastonbury Abbey in association with Cameron Mackintosh Ltd); Belle in Beauty and the Beast (Grand Opera House, Belfast), and Princess Apricot in Jack and the Beanstalk (Grand Opera House, Belfast). Georgia also forms one half of UK country duo; One Trick Pony with actor Michael Pickering. Together they have toured the world.

The Osmonds: A New Musical with story by Jay Osmond tells the true story of the five brothers from Utah who were pushed into the spotlight as children and went on to create smash hits, decade after decade. From their star residency on The Andy Williams Show from 1962 to 1969, to pop stars and ‘Osmondmania’ from 1971 to 1975, to the arrival of The Donny & Marie Show, a popular variety TV show, from 1976 to 1979, The Osmonds lived a remarkable life recording chart-topping albums, selling out vast arena concerts and making record-breaking TV shows - until one bad decision cost them everything.

The musical features a list of 1970s anthems, including One Bad Apple, Down by the Lazy River, Crazy Horses, Let Me In, Love Me for a Reason, (We’re) Having a Party, Puppy Love, Long Haired Lover From Liverpool, Paper Roses, and many more.

The Osmonds have sold over 100 million records worldwide and won 59 Gold & Platinum awards, and now Jay Osmond pulls back the curtain to reveal the real family behind all these hits: parents George and Olive Osmond and their nine children, Virl, Tom, Alan, Wayne, Merrill, Jay, Donny, Marie and Jimmy.

The World Premiere of The Osmonds: A New Musical is produced by ROYO in partnership with Twins Entertainment, with Vicky Nojesproduktion, Krall Entertainment, Aria Entertainment and Guy James Theatrical.