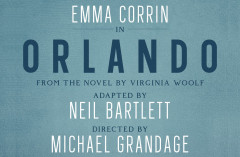 The Michael Grandage Company today announces that Emma Corrin will return to the London stage as the title role in Orlando, from the novel by Virginia Woolf in a new version by Neil Bartlett. Michael Grandage directs, reuniting him with Corrin, following their recent collaboration on the feature film My Policeman for Amazon. The production will debut in the West End in late Autumn, with full dates and theatre to be announced shortly.

Michael Grandage said today, “Neil Bartlett’s joyous new adaptation of Virginia Woolf’s Orlando dances through time and gender, challenging us to remember that nothing really matters except the courage to be yourself. It is one of the most surprising stories in the English language, and with its inspiring vision of all bodies having equal rights to love, I’m delighted that MGC is returning to the West End with Emma Corrin to bring this timely story to a whole new audience.”

Continuing their commitment to accessible ticket prices across their productions, MGC will have £10 tickets available across the run.

Emma Corrin returns to the stage to play Orlando, following their Olivier Award nominated performance in Anna X (Harold Pinter Theatre).For television, their credits include playing Lady Diana Spencer in the award-winning The Crown -for which they won a Golden Globe and Critics Choice Award, as well as receiving a SAG and Emmy nomination. Emma will go on to star in the upcoming films My Policeman and Lady Chatterly’s Lover and limited-series Retreat.

Neil Bartlett's vividly theatrical adaptations, translations and plays have been staged by the National Theatre (Berenice, The Game of Love and Chance, In Extremis and Or You Could Kiss Me, his collaboration with Handspring Theatre Company, the creators of Warhorse), theRSC ( The Dispute, The Prince of Homburg), the Abbey in Dublin (The Picture of Dorian Gray), the Royal Exchange, Manchester (Everybody Loves A Winner, Twenty-Four Hours of Peace), Bristol Old Vic (Great Expectations) and the Lyric Hammersmith (Oliver Twist and A Christmas Carol). He has also made work for, amongst others, the Drill Hall, the Glasgow Citizens, the Royal Court Theatre and the Royal Vauxhall Tavern. From 1994 to 2005 Bartlett was Artistic Director of the Lyric Hammersmith, and his work there earned him both an OBE (in 2003) and a nomination for an Olivier Award for Outstanding Theatrical Achievement (in 2000). In 2008 he was an awarded an honorary degree by Brookes University Oxford in recognition of his pioneering and longstanding commitment to gay culture and civil rights; this year, his fifth and most recent novel, Address Book, has just been longlisted for the Polari Prize.

Michael Grandage is Artistic Director of the Michael Grandage Company (MGC) where he most recently directed the film My Policeman (2022) starring Harry Styles, Emma Corrin, Gina McKee, Linus Roache, David Dawson and Rupert Everett which will be released on 21 October 2022. Previously, his other film work for MGC included Genius (2016) starring Colin Firth, Jude Law, Nicole Kidman, and Laura Linney which premiered at the Berlin Film Festival. For MGC in the theatre he has directed Ian McDiarmid in The Lemon Table (UK Tour), Aidan Turner in The Lieutenant of Inishmore (Noël Coward Theatre), Alfred Molina and Alfred Enoch in Red (Wyndham’s Theatre), Nicole Kidman in Photograph 51 (Noël Coward Theatre), Dawn French: 30 Million Minutes (national and international tour and West End), Jude Law in Henry V, David Walliams and Sheridan Smith in A Midsummer Night’s Dream, Daniel Radcliffe in The Cripple of Inishmaan, Judi Dench and Ben Whishaw in Peter and Alice and Simon Russell Beale in Privates on Parade as part of the season at the Noël Coward Theatre. In September he directs Dawn French’s new show Dawn French Is A Huge Twat.

His opera work includes Madama Butterfly for Houston Grand Opera and Chicago Lyric Opera, Le Nozzi de Figaro for Glyndebourne and Houston, Don Giovanni for the Met and Billy Budd for San Francisco, Glyndebourne and BAM in New York. He was Artistic Director of the Donmar Warehouse (2002–2012) and Sheffield Theatres (2000-2005) where his work included Chiwetel Ejiofor in Othello, Frank Langella and Michael Sheen in Frost/Nixon, Derek Jacobi in King Lear, Eddie Redmayne and Alfred Molina in Red (Tony Award for Best Director), Jude Law in Hamlet and Kenneth Branagh in Ivanov. He won three Olivier Awards for his musical productions of Guys and Dolls, Merrily We Roll Along and Grand Hotel. He is President of the Royal Central School of Speech and Drama. He was appointed CBE in the Queen’s Birthday Honors 2011. His book, A Decade At The Donmar, was published by Constable & Robins in 2012. His charity, set up to help young theatre makers, can be found at www.mgcfutures.com.