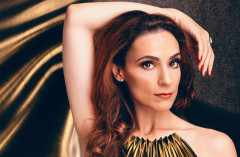 The Olivier Award nominated producers of the 2017 smash-hit La bohème, present a Puccini double-bill, Opera Undone: Tosca & La bohème, in brand new English versions by David Eaton and Adam Spreadbury-Maher. The production will run at Trafalgar Studios 2 from 5 February to 7 March 2020. Adam Spreadbury-Maher, Artistic Director of the King’s Head Theatre, will also direct the production, with musical direction from David Eaton. Opera Undone: Tosca & La bohème will have national press nights on Monday 10 and Tuesday 11 February 2020 for the two casts.

Opera Undone is a new strand of the King's Head Theatre's celebrated opera programming, whereby famous operas are radically reimagined in a punchy 60-minute format and sung entirely in English. This revolutionary new form tears up the opera rulebook for a whole new generation. Newcomers to opera, along with diehard fans will be able to experience in one evening two enthralling tales of love, heartbreak and deception as they've never been told before.

La bohème is a thoroughly modern look at relationships, addiction and co-dependency in London’s hip and happening Peckham. On-off couple Marcus and Melissa navigate the emotional complexities of a polyamorous relationship, whilst flatmate Rod’s gratification on Grindr is disrupted when he meets the beautiful and enigmatic Luca.

Tosca is an electrifying tale of love, lies and abuse in present-day Hollywood. Amidst the glitz and glamour of Tinsel Town, an all-powerful producer preys on an actress, seeking to manipulate and distort her relationship with an up-and-coming screenwriter for his own nefarious and troubling purposes.

David Eaton has been the Musical Director of leading chamber opera company, Charles Court Opera, for over ten years, and has worked with them on productions from across the classical repertoire, most notably Gilbert & Sullivan but also Puccini, Mozart, Ligeti, Peter Maxwell Davies and Rodgers. As an accompanist, he has played at concert venues across the country including St. John’s Smith Square, the Purcell Room and the Wigmore Hall as well as performing several times live on Radio 3 and BBC Television. David has also had translations performed at the Grimeborn Festival.

Opera Undone: Tosca & La bohème will be directed by Adam Spreadbury-Maher, with musical direction from David Eaton, with design by Amanda Mascarenhas and lighting by Nic Farman.

This production is produced by King’s Head Theatre, Making Productions and RGM Productions in association with DeVere Productions.