Rehearsals begin for NOTMOSES as full cast is announced

by Best of Theatre Staff on Monday 15 February 2016, 11:57 am in Cast Changes and Announcements 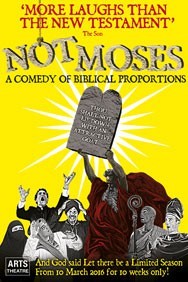 As rehearsal begin, Monday 15 February 2016, for NotMoses, Gary Sinyor’s first play which he also directs, the final casting and full creative team are announced. NotMoses begins previews at the Arts Theatre on 10 March 2016 with press night on 15 March with booking to 14 May 2016.

Danielle Bird will play Miriam and joins the previously announced, Antonia Davies as Aviva, Dana Haqjoo as Pharaoh, Greg Barnett as NotMoses, Jasmine Hyde as the Princess, Joe Morrow as Feripoti, Thomas Nelstrop as Moses, Niv Petel as Rameses and Leon Stewart plays the Rabbi. Thirteen year old Izzy Lee from Barnet and twelve year old Theo Mackenzie from Kensington will alternate performing the voice of the Son of God.

Designs are by Carla Goodman with lighting by Humphrey McDermott, sound by Luke Swaffield and music by Erran Baron Cohen.

Set in Ancient Egypt, NotMoses is the story of a crying baby who is plucked from his basket by a Princess only to be dumped back in the Nile when she sees a nicer baby, Moses. NotMoses grows up a disgruntled slave whilst Prince Moses studies accountancy at Pharaoh’s court. When both men are forced to flee into the Sinai desert, they make kebabs on the burning bush before the Good Lord himself orders them to lead the Jews out of bondage and into a land full of cows and bees. Eventually, it’s the alluring Miriam – a woman! – who leads the Exodus. NotMoses is an important work that answers the question that has troubled mankind throughout the ages: Does oral sex constitute adultery? Destined to end up in a drawer in every hotel room in the world, there’s only one play in town where you can experience the wonder of the ten plagues (even if they are mainly offstage).

Danielle Bird’s (Miriam) theatre credits include The Lion, The Witch and The Wardrobe for Birmingham REP, Alice’s Adventures Underground for Les Enfants Terribles Theatre Company, Macbeth, Comedy of Errors, A Midsummer Night’s Dream, Othello and Cyrano de Bergerac for the Grosvenor Open Air Theatre, Princess and The Pea for Tutti Frutti and York Theatre Royal, Father Christmas and The Icicle Bicycle and Tea Time for Oxford Playhouse, The Prince and The Pauper for the Unicorn Theatre, Colin Hoult’s Real Horror Show for Leicester Square Theatre, No Ball Games for the New Wolsey Theatre, As You Like It for the Principal Theatre Company, Romeo and Juliet and Hamlet for the Young Shakespeare Company and You Me Bum Bum Train in Holborn. Her television credits include The Wives Did It, Holby City and The Double Life of Morton Coyle. Her film credits include Now You see Me, The Second Act and A Running Jump.

After graduating from the National Film and Television School with BAFTA nominated The Unkindest Cut, award winning film-maker Gary Sinyor was commissioned by Python star Eric Idle to write Leon the Pig Farmer. Sinyor went on to win the Venice International Film Festival’s Critics Choice Award and the Evening Standard Award for Best Newcomer. Sinyor has written, directed or produced numerous feature films including United We Fall with Jack Donnelly, Retreat, In Your Dreams, Bob The Butler with Tom Green and Brooke Shields, The Bachelor with Renee Zellweger, Stiff Upper Lips with Peter Ustinov and Prunella Scales, Solitaire for 2 with Maryam D’Abo and Jason Isaacs as well as Leon The Pig Farmer with Brian Glover. Last year he directed and produced the improvised mockumentary United We Fall about a group of failed footballers. He has written The Unseen a unique psychological thriller and a US based high concept wedding comedy Something Blue.

NotMoses is produced in the West End by Magnet Productions Limited, with Julian Stoneman for MPSI Ltd.