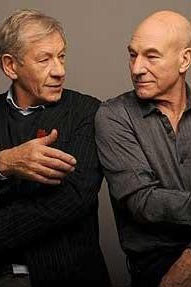 New producers on the block, Playful Productions have announced that they will be bringing the hugely successful Broadway production of Harold Pinter’s No Man’s Land to the West End.

The production opened in New York last year and starred our very own Patrick Stewart and Ian McKellen. No Man’s Land played in rep with the revival of Samuel Beckett’s Waiting for Godot at the Cort Theatre in 2013. The West End saw the production of Waiting for Godot, starring McKellen and Stewart at the Theatre Royal Haymarket back in 2009.

Pinter’s No Man’s Land was written in 1974 and first seen on stage at the Old Vic Theatre (the then home of the National Theatre) in April 1975. This production transferred to the Wyndham's Theatre the same year.

Playful Productions is headed up by Nick Salmon, Matthew Byam Shaw and Nia Janis. The trio started the company in 2011, and their first full production was The Weir by Conor McPherson, which they transferred from the Donmar Warehouse to the Wyndham's Theatre in 2014. Other productions, such as the transfer of the Royal Shakepeare Company’s double bill of Wolf Hall and Bring Up The Bodies, and the UK tour of Shrek The Musical have proved to be financially very lucrative for Playful Productions.

Exact dates and a West End theatre have yet to be announced for No Man’s Land, but it’s safe to say that with the star pulling power of Ian McKellen and Patrick Stewart, the production will be the hottest ticket in London!