Casting announced for Nightfall at the Bridge Theatre

by Best of Theatre Staff on Tuesday 16 January 2018, 3:12 pm in Cast Changes and Announcements 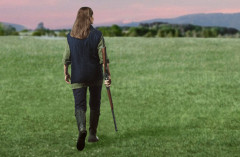 Laurie Sansom will direct Ophelia Lovibond (Lou), Ukweli Roach (Pete) and Sion Daniel Young (Ryan) in the world premiere of Barney Norris’s Nightfall running at the Bridge Theatre from 28 April – 3 June 2018, with press night on 8 May 2018. Final casting will be announced shortly.

On a farm outside Winchester, Ryan struggles to make a living off the land. His sister Lou has returned home after the death of their father to support Jenny, their formidable mother. Not so long ago, when a neighbour's Labrador strayed onto the farm, their dad reached for his shotgun. Now, when Lou's boyfriend Pete reappears, flush with money from his job at an oil refinery, Jenny fights to hold her children to the life she planned for them.

Ophelia Lovibond is best known on television for playing Izzy Gould in the BBC’s W1A and was last on stage in Richard Eyre’s production of The Stepmother at Chichester Festival Theatre. Her other theatre credits include The Libertine at the Theatre Royal Haymarket and The Effect for Sheffield Theatres. Her other television credits include Hooten & the Lady, Elementary, Inside No 9, Mr Sloaneand Nathan Barley. Her films include Tommy's Honor, The Autopsy of Jane Doe, Man Up, Guardians of the Galaxy, A Single Shot, Gozo, Mr Popper's Penguins, No Strings Attached, 4.3.2.1, Chatroom, London Boulevard, Nowhere Boy, Shadows in the Sun and Oliver Twist.

Ukweli Roach’stheatre credits include Romeo and Juliet and Helen, both for Shakespeare’s Globe and 5, 6, 7, 8 for the Royal Court. His television credits include Humans, Hard Sun, Blindspot, The Royals, Grantchester and Silk. His film credits include Streetdance 3D, One Day and Venus and the Son.

Upon graduating from university, Barney Norris founded Up In Arms Theatre Company, of which he is the co-Artistic Director. His first play Visitors ran at the Arcola Theatre before transferring to the Bush Theatre, winning him the 2014 Critics' Circle Award for Most Promising Playwright. His other full-length plays are Eventide, Echo’s End and While We’re Here. Norris is the author of a bestselling novel, Five Rivers Met on a Wooded Plain, and a book on theatre: To Bodies Gone: The Theatre of Peter Gill. His second novel, Turning For Home, was published this month.

As Chief Executive/Artistic Director of the National Theatre of Scotland Laurie Sansom directed Rona Munro’s The James Plays which were co-presented by the Edinburgh International Festival and the National Theatre of Great Britain and toured the world. Sansom was previously Artistic Director of Royal & Derngate, Northampton, where he directed the UK premiers of Tennessee Williams’ Spring Storm and Eugene O’Neill’s Beyond The Horizon and The Festival of Chaos for London 2012. He was also Alan Ayckbourn’s Associate Director at the Stephen Joseph Theatre, Scarborough.