Full Cast and Full Tour Dates for Night Must Fall 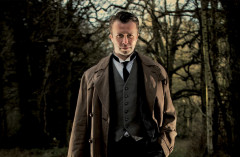 Niamh McGrady and Will Featherstone will star as Olivia and Dan respectively in the national tour of Emlyn Williams’s psychological thriller, NIGHT MUST FALL, directed by Luke Sheppard, joining the previously announced Gwen Taylor as Mrs Bransom and Daragh O’Malley as Inspector Belsize, along with Alasdair Buchan as Hubert, Anne Odeke as Nurse Libby, Mandi Symonds as Mrs Terence and Melissa Vaughan as Dora.

Will Featherstone’s theatre credits include Dr. Scroggy’s War, Romeo and Juliet, As You Like It and Anne Boleyn for Shakespeare’s Globe, A Midsummer Night’s Dream and The Comedy of Errors for Propeller, and The History Boys for Sheffield Crucible. Screen credits including Fresh Meat (Channel 4), Endeavour (ITV), Ashes to Ashes (BBC) and Midsomer Murders (ITV), as well as the forthcoming feature film A United Kingdom, starring Rosamund Pike and David Oyelowo.

New dates have also been added to the tour, which will now end at Yvonne Arnaud, Guildford on 3 December.

When charming, smooth-talking Dan arrives at old Mrs Bramson’s remote woodland home, he soon ingratiates his way into her life and that of her niece, Olivia. But when a local woman goes missing and is later found murdered, Olivia begins to suspect her aunt’s new private assistant. She resolves to find out the truth.

Emlyn Williams wrote NIGHT MUST FALL in 1935 and played the lead role in the first stage production. The play was noted for its exploration of the killer’s complex psychological state, a step forward for its genre. Robert Montgomery starred in the film version in 1937 and Albert Finney in the 1964 re-make.

NIGHT MUST FALL will be designed by David Woodhead, with sound and music by Harry Blake and lighting by Howard Hudson. The national tour is produced by Alastair Whatley and Tom Hackney for The Original Theatre Company and Sebastian Warrack for Salisbury Playhouse, in association with Eastbourne Theatres.