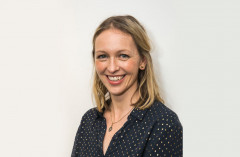 Imogen brings a wealth of experience to the role of Executive Director, having worked in the performing arts for over 16 years. Since 2008 Imogen has been Senior Producer at the Lyric Hammersmith. She has produced Alan Parker’s Bugsy Malone, Ghost Stories by Jeremy Dyson and Andy Nyman, which subsequently transferred into the West End, the Olivier Award-winning revival of Sarah Kane’s Blasted and most recently Simon Stephen’s new version of The Seagull among other productions. Previous to the Lyric she held roles at Act Productions, Half Moon Young People’s Theatre and Theatre Royal Plymouth. She is a past participant of the Clore Leadership short course.

Imogen Kinchin, Executive Director-Designate said: “I am thrilled to be joining Matthew, Robert and the New Adventures team at such an exciting time for the company. Having been involved with the company as a founding trustee of Matthew’s charity, I’ve been constantly inspired by the work both on and off stage. It’s an honour and privilege to now join the company as Executive Director.”

Matthew Bourne, Artistic Director at New Adventures said: “I am delighted Imogen is joining us in the role of Executive Director. She brings a passion and love for the work as well as extensive experience in the performing arts that I am sure will take us in exciting new directions over the coming years.”

Sean Holmes, Artistic Director at the Lyric Hammersmith said: “Imogen has been the most brilliant collaborator, colleague and friend over her nine years at the Lyric. We look forward with excitement to all that she will achieve in her new role.”