by Best of Theatre Staff on Thursday 31 October 2019, 10:13 am in Cast Changes and Announcements 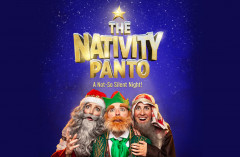 The King’s Head Theatre and Charles Court Opera are delighted to announce the full cast for The Nativity Panto - A Not-So Silent Night, starring Emily Cairns, Meriel Cunningham, Jennie Jacobs, Matthew Kellett and Catrine Kirkman. The panto runs from 29 November 2019 to 11 January 2020, with a press night on Tuesday 3 December 2019.

Meriel Cunningham graduated from Guildhall School of Music and Drama. Since graduating, her opera credits include Dorilla in Tempe (Wexford Festival Opera), The Return of Ulysses (The Roundhouse for Royal Opera), The Tales of Hoffmann (Grimeborn Opera Festival), H.M.S Pinafore and Ruddigore (Charles Court Opera). Her theatre credits include An Evening on Broadway (Milton Court Theatre), Guys and Dolls, Crazy For You (Silk Street Theatre for Guildhall). Meriel’s recent concert highlights include a recital of Kurt Weill Cabaret Songs at Barbican Hall and performing a selection of jazz standards with Derek Paravicini at St John Smith Square for their My Music concert series.

Jennie Jacobs earlier this year starred as Little Buttercup in H.M.S. Pinafore (King’s Head Theatre / National Tour). Her other performing credits include Buttons: A Cinderella Story (King’s Head Theatre) and Guilty of Love (National Tour). Jennie has also been a part of the vocal groups The Rudy Vees, Graffiti Voices, ANCORA and Opera Girls. As well as performing she is a recording artist, cabaret performer, writer and comic.

Matthew Kellett is returning for his seventh pantomime with Charles Court Opera. His previous appearances have included d’Artagnon in The Three Musketeers, Billy in Billy the Kidd, El Tabasco in Pinocchio, Lord Conniving in King Tut, Buttons in Buttons: A Cinderella Story, and all seven of Snow White’s dwarfs in Mirror Mirror. He has also made many appearances with CCO outside of panto, including most recently H.M.S. Pinafore. His other recent theatre credits include The Elixir of Love (King’s Head Theatre), The Yeomen of the Guard, The Gondoliers, The Mikado and The Pirates of Penzance (UK Tour with National Gilbert and Sullivan Opera Company).

This year, Charles Court Opera has taken the story that sparked the Season and sprinkled it with a generous helping of magic, whimsy and Christmas cheer to create their most joyous show yet. A cast of well-known characters will take the audience through a respectful, yet irreverent adaptation of the Nativity story, with musical numbers, laugh-out-loud puns and – as always – the entirely unexpected. From adult-only evening performances through to family matinees, The Nativity Panto is perfect for parents and children, couples, groups of friends and office parties.

The Nativity Panto will be written and directed by John Savournin with original music and lyrics by David Eaton, choreography by Damian Czarnecki, and setdesign by Rachel Szmukler, with lighting design by Ben Pickersgill, and costume design by Mia Wallden and Catrin Short Thyrsson.

This production is co-produced by The King’s Head Theatre and Charles Court Opera.