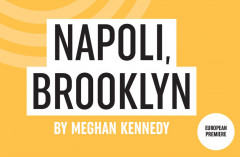 Robert Cavanah as Nic, Madeleine Worrall as Luda and Laurie Ogden as Connie join the previously announced Georgia May Foote as Vita, Hannah Bristow as Fran, Mona Goodwin as Tina, Gloria Onitiri as Celia and Stephen Hogan as Albert in the 2019 European Premiere of Meghan Kennedy’s NAPOLI, BROOKLYN, beginning a UK Tour on 1 May at Malvern Theatres, running through to 8 June at Oxford Playhouse. The Tour will be followed by a limited four-week season from 13 June to 13 July at Park Theatre, London, with a national press night on Monday 17 June 2019.

NAPOLI, BROOKLYN was originally presented by Roundabout Theatre Company at the Laura Pels Theatre, New York. It is the story of an Italian-American family in 1959. It explores the struggle in immigrant families which is passed down from generation to generation, particularly for women. Set in Brooklyn, it's a story of strong women taking risks to define a generation as they are forced to confront their conflicting visions for the future in this gripping, provocative portrait of love in all its danger and beauty.

NAPOLI, BROOKLYN is directed by Lisa Blair, designed by Frankie Bradshaw, with lighting by Johanna Town, sound by Max Pappenheim and casting by Ruth O’Dowd. The production is produced by The Original Theatre Company in association with Park Theatre.