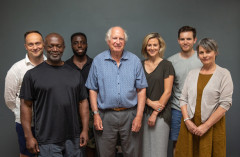 Preparations are in hand for the irascible Lady L’s birthday party but her children are there not for family loyalty or celebration but to claim what they feel is rightly theirs. On another part of the estate Kapenie and his grandson argue about loyalty. Kapenie is loyal to a family but not his own and the generational divide is splitting even wider.

Set against a backdrop of prejudice and inequality, My One True Friend has a profound and life-altering friendship at its heart.

Alexander Matthews today said, “Unfortunately racism is still with us. It refuses to go away. I believe that humanity will not survive without tolerance – and racial tolerance is part of that necessity. Through writing this play I hope to enliven the conversation surrounding the prejudices that we see and, in some cases, tolerate in our own lives. I’m also very pleased to, once again, bring my work to the Tristan Bates Theatre this summer.”

Alexander Matthews is a writer and academic. Previous credits as a playwright includeDo You Love This Planet?, Screaming Secrets and Glass Roots (Tristan Bates Theatre). Matthews taught Philosophy between 1975 – 1986, including a Visiting Fellowship to Princeton University in 1986, in 1977 he published A Diagram of Definition on the Philosophy of Language. For 15 years Matthews has chaired the Martha Gellhorn Trust Prize Committee, which offers a prize for journalism annually. He has also chaired the NSubF Committee, which advises the UK government on the disposal of nuclear waste for submarines, and has been chairman of the local Kingsbridge Peace Group since 1992.