Is Motown: The Musical headed for the West End? 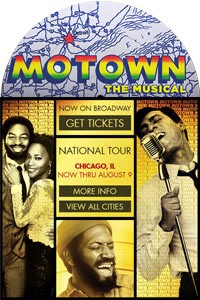 After the news that Queen musical We Will Rock You is to close at the Dominion Theatre at the end of May 2014 after 12 triumphant years, speculation has already begun on which show will take over at the large Dominion Theatre.

At the top of the rumour list is current Broadway mega-hit Motown: The Musical. The show follows the story of Motown founder Berry Gordy and how he created the soul label in downtown Detroit in the early 1960s. He later signed legendary artists such as Smokey Robinson, Marvin Gaye, Stevie Wonder, The Jackson Five and The Supremes. The musical also chronicles Gordy’s affair with Supremes lead singer Diana Ross. Berry Gordy co-wrote the show and there have been a few raised eyebrows in the music business concerning the amount of credit he took for Motown’s success. The shows creators are considering tweaking the musical's storyline so that Gordy doesn’t come across as an arrogant music mogul.

Peppered throughout the show are some fifty re-workings of Motown classics including Baby I Need Your Lovin', I’ll Be There, I Heard it Through the Grapevine, Reach Out and Touch, You’re All I Need, I Can’t Help Myself (Sugar Pie Honey Bunch) and many, many more.

Much like We Will Rock You, Motown: The Musical did not fair very well with the critics, but the public have ignored the star ratings and gone for the soulful vibe and hit music of the 60s, 70s and 80s.

The Dominion will shut after the final performance of We Will Rock You on 31 May 2014 for four months of refurbishment and maintenance so that basic facilities can be updated. If all goes to plan, Motown: The Musical is expected to begin performances at the Dominion later this year or early in 2015.