Full casting announced for MOTHER OF HIM at Park200

by Best of Theatre Staff on Tuesday 27 August 2019, 1:59 pm in Cast Changes and Announcements 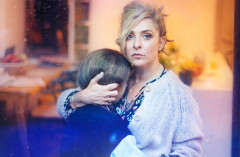 Full casting has been announced for Evan Placey’s award-winning drama Mother of Him, which opens at Park Theatre on 18 September running until 26 October, with press night on Tuesday 24 September at 19.00 in Park200.

Mother of Him is directed by Max Lindsay, with designs by Lee Newby, lighting by Ali Hunter and sound by Fergus O’Hare.

A child accused. A mother conflicted. Is love really unconditional?

Brenda, a single Jewish mother sends her youngest son, Jason, off to school. His elder brother remains asleep upstairs. This could be a day like any other, if older brother Matthew wasn't under house arrest.

Pursued by the media and tormented by guilt, Brenda tries to hold her family together as the world is set to tear them apart.

Mother of Him is produced by Jacob Thomas and Oliver Mackwood Productions in association with Park Theatre, and follows Oliver’s past Park Theatre hits, The Life I Lead, Pressure and Madame Rubinstein.

Scott Folan’s (Matthew Kapowitz) stage credits include: This Is My Family (Chichester Festival Theatre), Damned By Despair (National Theatre), Sunday In The Park With George (The Other Palace) and Spring Awakening (Leicester Curve). Scott’s screen credits include: Nativity 2: Danger In The Manger, Brotherhood, Dixi4, Blinded By The Light, Breathless, Café Afrik and Outside Bet. Scott is also an emerging singer-songwriter who writes in a Pop-Folk style. His music can be found on all major music platforms including Spotify and Apple Music or from his social media platforms under the tag @scott_folan.

Anjelica Serra’s (Jessica/Tess) stage credits include: The Suppliant Women, And Yet It Moves and The American Dream 2.0 (all at the Young Vic) and Connections (Theatre 503). Anjelica’s screen credits include:The Power, Dormitory andMichelle.