MISS NIGHTINGALE opens at the Theatre at the Hippodrome Casino 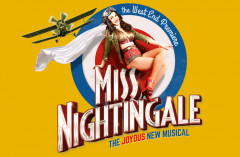 Miss Nightingale, will make its West End debut at the prestigious Theatre at the Hippodrome Casino in London’s Leicester Square, for a strictly limited seven-week run in their 180-seat theatre, from 21 March – 6 May.

This original British musical, set in 1940s London during World War Two, is created and written by Matthew Bugg and features 16 original songs, from innuendo-laden Music Hall style numbers to tender ballads and complex trios and quartets, which wonderfully capture the soaring spirit and biting wit of the 40s.

An intimate underground cabaret club opens in the heart of London. A saucy new star shines under the spotlight. Two men struggle to bring their illicit love out of the shadows. The war- torn capital has never been so revealing!

Welcome to the Glitz of the Blitz; where showgirls, secrets and scandal abound. A world where aristocrats jostle with black-market spivs, songwriters take to the streets and nothing is quite as it seems.

Maggie Brown, an aspiring singer and her best friend George Nowodny, a songwriter and Jewish refugee, perform a dazzling act at the newest nightclub in town, owned by wealthy socialite and RAF war-hero, Sir Frank Worthington-Blythe. Maggie’s beau Tom Connor, paves the way for the sexy and charismatic ‘Miss Nightingale’ to be born, and the musical duo quickly find themselves with a West End hit! However, what the leading lady doesn’t know, is that George and Sir Frank are hiding a secret and as Miss Nightingale’s success grows, so does a forbidden love between the two men!

From the moment the audience arrive at the Hippodrome Casino’s beautifully intimate theatre, they will be taken back in time to the hilarious and heart-warming world of the wartime West End. Themed food and drink will be served at cabaret tables and the audience will be able to immerse themselves in WW2 London life during the days of air-raids, rationing and the Great British stiff upper lip.

This joyous, new musical is performed by a cast of six actor-musicians, led by Lauren Chinery in the title role, alongside Oliver Mawdsley as Frank, Matthew Floyd Jones as George, Adam Langstaff as Tom, Tobias Oliver as Clifford and Matthew Bugg himself, in the role of Harry.

Miss Nightingale has designs by Carla Goodman, lighting by Craig Garratt, original lighting designs by David Phillips, sound by Danny Kissane, and is produced by Mr Bugg Presents and The Hippodrome Casino.

Since it was first staged in 2011 at The Lowry Studio, Salford, Miss Nightingale has completed five sold-out UK tours, a headline season at The Vaults in 2017 and featured in the Guardian’s ‘Top 50 Must-Sees’.

Matthew Floyd Jones’s (George Nowodny) stage credits include Camera Lucida at the Barbican, Heels of Glory at Chelsea Theatre and Punch at Underbelly. Matthew’s writing credits include Richard Carpenter is Close to You on UK tour (Buxton Fringe Award winner), Beans at Canal Café and Session Squared at 48HFP (Audience Award winner). His composing credits include A Super Happy Story About Feeling Super Sad at Pleasance (Fringe First winner) and musical directing credits for Beauty and the Beast at Cast Theatre, Doncaster, and Stay Another Song at the Young Vic. Matthew is one half of acclaimed comedy duo Frisky & Mannish.

Adam Langstaff’s (Tom Connor) stage credits include Oxy and The Morons, Beauty and the Beast, Sword in the Stone, Sinbad and Red Riding Hood all at the New Wolsey Theatre, Ipswich, Tommy on UK tour, Roll Over Beethoven at the Belgrade Theatre, Coventry, Jackie the Musical on UK tour, Manon Lescaut for the Royal Opera, Hot Stuff at the Queens Theatre, Hornchurch, Our House on UK tour, Gawain and The Green Knight at The Yard, London, The Flying Dutchman for the English National Opera, Miss Nightingale on UK tour, Emperor and Galilean at the National Theatre, Alice in Wonderland for Exquisite Folly, London and Noah's Ark at the Mervyn Peake Centenary Festival, Blue Elephant Theatre, London. Adam’s screen credits include Alan Partridge: Alpha Papa.

Oliver Mawdsley’s (Sir Frank Worthington-Blythe) stage credits include Beauty and the Beast at Cast Theatre, By Jeeves and Where is Peter Rabbit? both at the Old Laundry Theatre, The Snow Queen, The Hundred and One Dalmatians and A Christmas Carol all at the New Vic Theatre, The Mystery of Edwin Drood at the Arts Theatre, West End, Jack and the Beanstalk at Theatre Royal, Bury St. Edmunds, A Midsummer Night's Dream at Red Rose Chain, I Capture the Castle for the Watford Palace Theatre Workshop, The Princess and the Pea at York Theatre Royal and UK & International Tour, Godspell and The Cowardly Porter both at Frinton Summer Theatre, Thirteen Days at the Arcola Theatre, My Favorite Madman at the Tristan Bates Theatre, The Hunting of the Snark and A Midsummer Night's Dream both at Iris Theatre and Maya at Baron’s Court Theatre. Oliver’s screen credits include Peterloo for Thin Man Films, Chancery Lot for Haligonian Productions and The Devil's Lamp for LFS/National Portrait Gallery.

Tobias Oliver’s (Producer/Clifford) stage credits include Miss Nightingale on UK tours and London runs (2013-2017), Love and Romance at Cast Theatre, Doncaster, Antigone at Baron’s Court Theatre, Half a Hamlet at Edinburgh Festival and Hamlet, The Revenger’s Tragedy, Two Noble Kingsmen, and Cracks at Drama Studio, Sheffield. Tobias’s screen and radio credits include The Maths Programme for Channel 4 and the monologue Trade for Spectrum Radio.

MR BUGG PRESENTS is an artisan theatre company based in Sheffield, which specialises in new and original British musical theatre. The company was established in 2010 by husband-and-husband team, Matthew Bugg and Tobias Oliver to produce Miss Nightingale the new and original British musical written by Matthew Bugg. The pair also created the world’s first fully BSL integrated Pantomime at Cast Theatre, Doncaster last Christmas. They have been together since 1994.

THE HIPPODROME CASINO is the UK’s largest and most popular casino and entertainment venue. Located in Leicester Square, in the heart of the capital’s West End, The Hippodrome has three casino floors, a restaurant judged The Best Steak House in London, a 180-seat theatre, six bars and an indoor smoking terrace. It's the biggest licensed premises in the West End and has presented some of the world's biggest musical theatre, dance, comedy and rock performers. Pop legend Prince performed his final ever UK gig at The Hippodrome in 2014.