by Best of Theatre Staff on Thursday 16 February 2017, 9:42 am in Cast Changes and Announcements 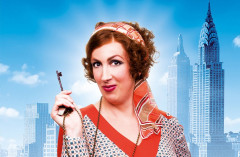 Multi award-winning comedy writer, actor and author Miranda Hart, will make her West End Theatre debut as Miss Hannigan in Annie opening in the West End in May 2017. Previews at the Piccadilly Theatre will begin on 23 May 2017 with opening night on 5 June 2017. The production, directed by Nikolai Foster, will be produced by Michael Harrison and David Ian. Further casting will be announced shortly.

Miranda Hart said: “Miss Hannigan is a dream role, and certainly has been for me, but I never thought it would be a reality. But here we are and I have a newly found musical theatre-esque spring in my step! I hope people will leave the theatre feeling life is a little better and dreamier and jollier after watching it, as much as we feel that performing it. Now if you’ll excuse me, I have some leg-warmers to put on…”

Public booking for Annie opens on Monday 27 February 2017 at 10am with the production initially booking to 6 January 2018. Children’s tickets will be half price for Monday to Thursday performances.

Set in 1930s New York during The Great Depression, brave young Annie is forced to live a life of misery and torment at Miss Hannigan’s orphanage. Her luck changes when she is chosen to spend Christmas at the residence of famous billionaire, Oliver Warbucks. Meanwhile, spiteful Miss Hannigan has other ideas and hatches a plan to spoil Annie’s search for her true family…

Annie has book by Thomas Meehan adapted from the comic strip Little Orphan Annie, music by Charles Strouse and lyrics by Martin Charnin. The West End production will have sets and costumes designed by Colin Richmond, choreography by Nick Winston, lighting by Ben Cracknell, sound design by Richard Brooker and orchestration and musical direction by George Dyer.

Foster’s production arrives in the West End 40 years after the original Broadway production opened in 1977 and received seven Tony awards including the Best Musical, Best Score and Best Book. The last West End production of Annie opened at the Victoria Palace Theatre in 1998. In 1982, Annie was adapted for the big screen directed by John Huston with a cast including Carol Burnett, Bernadette Peters and Albert Finney and in 2014 a further feature film was released, directed by Will Gluck, with a cast including Cameron Diaz and Jamie Foxx. The much-loved score includes the classics It’s A Hard Knock Life, Tomorrow and Easy Street.

Miranda Hart is best known on television for her hugely successful, semi-auto-biographical and multi award-wining BBC sitcom Miranda which ran from 2009 for 3 series and 2 specials. She was the recipient of a BAFTA nomination, an NTA Award and two TV Choice Awards for her performance as Chummy in the BBC television drama Call the Midwife. In 2014 she completed her first sell out stand-up arena tour My, What I Call, Live Show culminating in five shows at London’s 02 Arena. As a best-selling author her first book Is It Just Me? was the biggest selling non-fiction hardback of 2013 winning Non-Fiction Book of the Year at The National Book Awards. She followed this in 2014 with The Best of Miranda and last year released her third book Peggy and Me. Her theatre credits include Cruising for The Bush Theatre, Come Out Eli for Battersea Arts Centre, All About Me for Soho Theatre as well as multiple appearances at the Edinburgh Fringe Festival. Her film credits include Spy, The Infidel, Magicians as well as upcoming The Nutcracker and The Four Realms (2018).

Nikolai Foster is Artistic Director at Curve. Since taking up his post in 2015, he has directed Jim Jacobs and Warren Casey’s Grease, Wilde’s The Importance of Being Earnest, Spring Awakening, Legally Blonde, Truman Capote’s Breakfast at Tiffany’s (also Theatre Royal Haymarket and on tour nationally), Roald Dahl’s The Witches, adapted by David Wood, Tennessee Williams’ A Streetcar Named Desire, Shakespeare’s Richard III, Jonathan Harvey’s Beautiful Thing and Timberlake Wertenbaker’s Our Country’s Good, a performance to celebrate the reveal of the tomb of King Richard III at Leicester Cathedral. Foster has also served as an Associate Director at West Yorkshire Playhouse Leeds as trained at Drama Centre London and at the Crucible, Sheffield, supported by the Regional Theatre Young Director scheme.