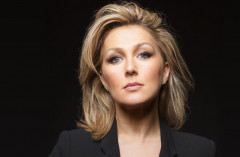 Mazz Murray will join the West End cast of CHICAGO at the Phoenix Theatre, playing the title role of Mama Morton from Monday 2 July. Also joining the cast on 2 July will be the previously announced Martin Kemp as Billy Flynn. They will join Sarah Soetaert, Josefina Gabrielle and Paul Rider as Roxie Hart, Velma Kelly and Amos Hart respectively.

Martin Kemp will be staying in the London production of CHICAGO until 2 September 2018, with Sarah Soetaert, Josefina Gabrielle, Mazz Murray and Paul Rider staying until 11 August 2018.

Mazz Murray’s previous theatre credits include nine years as Killer Queen in We Will Rock You (Dominion Theatre), Tanya in Mamma Mia! (Novello Theatre), Mabel in Fame (Victoria Palace), Grandma Bertha in Pippin (Bridewell Theatre) and Dusty Springfield in A Girl Called Dusty (Duke of York’s Theatre). On television, she has appeared in EastEnders and Footballers’ Wives, and on film in John Boorman’s Hope & Glory and the soon-to-be-released Mamma Mia! Here We Go Again. She has toured with Earth Wind & Fire and Billy Ocean as part of the band Woman the Band, and with Il Divo as a solo artist. Her debut solo album, Midnight Mazz, was released earlier this year.

The multi award-winning Kander & Ebb musical CHICAGO, winner of six Tony Awards, two Olivier Awards and a Grammy, returned to London’s West End on Monday 26 March, with a press night on Wednesday 11 April at the Phoenix Theatre in London.