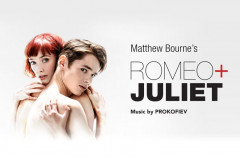 New Adventures is delighted to announce the world premiere of Matthew Bourne’s “ROMEO AND JULIET” opening at Curve, Leicester on Monday 13 May 2019, as part of a UK tour to 13 venues including a four-week summer season at Sadler’s Wells from Wednesday 7 August to Saturday 31 August 2019. Full tour schedule below.

As part of New Adventures’ ambition to support the next generation of on-stage talent and inspired by the success of “Lord of the Flies” in 2014, which combined professional dancers and young men with little or no dance experience, “ROMEO AND JULIET” will feature the finest emerging male and female dancers from around the UK. The search began in April 2018 with a call-out for the next generation of young dancers currently in training aged between 16 and 19. Attracting over 1000 applications and following a UK-wide audition tour, six Young Cast members at each venue will perform alongside the New Adventures company. This unique opportunity will nurture and develop young talent with a view to them embarking on a career in dance.

Matthew Bourne said today “New Adventures’ Romeo and Juliet will be a celebration of youthful energy, talent and creativity both on and off-stage and, uniquely, in all aspects of Choreography, Design and Music through the appointment of a series of “Young Associate Artists”. As we enter our fourth decade as a company, I’m finding the development of young talent ever more important and fulfilling. Our current company of “Swan Lake” features 29 young dancers making their debuts with us, many of those have come through our Company initiatives such as “Swan School”, “A Summer Adventure” and of course, our production of “Lord of the Flies” which inspired so many young men to seek careers in dance. This time we are focusing on nurturing young male and female dancers, and I have been overwhelmed by the talent that we have had to choose from throughout the UK. I’m particularly happy to be working alongside my Young Associate Choreographer, Arielle Smith, an exceptional young dancemaker of great maturity and vision. In turn, after 30 years as a professional choreographer, I look forward to being refreshed and inspired by what this team of young artists will bring to Shakespeare’s classic tale of tragic conflict and young love”.

The title roles of ‘Romeo’ and ‘Juliet’ will be played by six New Adventures rising stars and two exciting new dancers making their professional debuts.

‘Romeo’ will be performed by Andrew Monaghan, currently ‘The Pilot’ in “Cinderella”, Paris Fitzpatrick who is playing the ‘Angel’ in “Cinderella” and João Carolino who joined the company in 2017 with “Early Adventures”.

Making their professional debuts with the company are Harrison Dowzell, as ‘Romeo’, who auditioned for the Young Cast in Nottingham, and Bryony Wood, as ‘Juliet’, discovered during the Young Cast auditions in Southampton. Both are in their graduate years at Performers College and Tring Park School for the Performing Arts respectively. New Adventures is working in partnership with both vocational colleges to support the completion of their training during the tour.

Full cast to be announced shortly.