May The Voice Be With You - Mark Hamill to voice 'Kevin the Robot' in EUGENIUS! 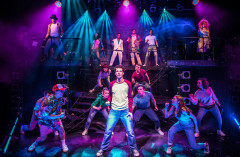 Warwick Davis and Kevin Wood are delighted to announce ‘Star Wars’ legend Mark Hamill as the voice of ‘Kevin The Robot’ in ‘Eugenius! The Musical’ which is currently playing for a strictly limited run at The Other Palace until 3 March 2018.

Mark Hamill is most famous for his roles on screen; in particular, playing the iconic role of Luke Skywalker in the ‘Star Wars’ film franchise. Mark is also renowned as one of the world’s leading voice actors and has voiced a number of character roles including ‘The Joker’ in ‘Batman: The Animated Series’, for which he won a BAFTA. Mark has also guest starred as a voice actor in the internationally acclaimed series, ‘Family Guy’ and ‘The Simpsons’.

Mark said of his part in the production today, ‘I am thrilled to be the voice of a character in this new British Musical, and to be supporting Warwick in his new venture. ‘Kevin The Robot’ is a small but important cameo in this nostalgic show which is currently taking London by storm with a brilliant original soundtrack and story line’.

Producer, Warwick Davis commented, ‘I have known Mark as a friend since first working with him in ‘Return of the Jedi’ in 1981. He’s such a talented voice-actor and I feel very lucky he agreed to take a cameo in ‘Eugenius!’ How did I persuade him to do it, you might ask? Well, it could have been a Jedi mind trick... ‘This is the droid you need to voice.’

Written by Ben Adams and Chris Wilkins. “EUGENIUS!” tells the story of Eugene, a teenage boy whose nightly dreams of a distant world of heroes and villains may just be the ticket to him creating his very own comic book movie in Hollywood. Joined by his best friends ‘Janey’ and ‘Feris’, our comic writing genius must discover the true meaning of growing up, finding the superhero within, saving the world from both earthbound villains and possibly those from distant galaxies, and along the way, falling in love.