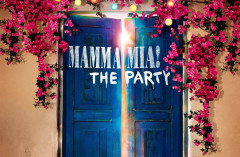 Executive producer Björn Ulvaeus and producer Ingrid Sutej are delighted to announce that MAMMA MIA! THE PARTY, an immersive theatrical and dining experience launched in Stockholm, will take up residency in a specially-adapted venue within London’s The O2. The London production of MAMMA MIA! THE PARTY is set to open late Spring 2019, with tickets going on sale this Autumn.

When Björn Ulvaeus watched people at the musical MAMMA MIA! having such a good time, getting into party mood by the end of the show, he thought to himself, “What if this could continue somewhere else?” The obvious place would be in a taverna on the island of Skopelos, where most exteriors of the first MAMMA MIA! film were shot. This imagined and wonderfully exotic Greek taverna – and its equally exotic landlord Nikos, his family and friends – became the home of MAMMA MIA! THE PARTY, which first opened in Stockholm in January 2016 where it is now in its third sold-out year.

Led by Steve Tompkins of architects Haworth Tompkins, work has begun on transforming one of the venues within The O2 into Nikos’ Taverna, and guests will feel as if they’re right in the heart of a Greek island paradise, sitting around tables in the taverna’s courtyard complete with a fountain, amongst olive trees and bougainvillea. While the story of Nikos and his family plays out in front of them, an audience of around 500 people will be able to eat great Mediterranean food, drink, and even have the opportunity to dance along to ABBA songs.

Björn Ulvaeus said of MAMMA MIA! THE PARTY’s future London home, “We have long admired The O2 and the huge entertainment success it has become under the ownership and management of AEG. We believe bringing MAMMA MIA! THE PARTY to The O2 will add to this already vibrant cultural destination and provide the perfect location for our exciting new show.”

John Langford, Vice President and General Manager of The O2, said, “To be hosting the MAMMA MIA! THE PARTY experience at The O2 is a real honour. It perfectly complements the outstanding live performances, events and the dynamic variety of entertainment all available under our world-famous roof.”