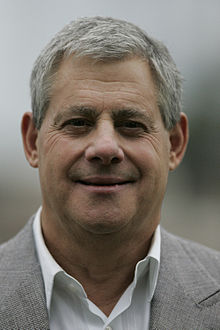 Cameron Mackintosh, widely considered to be the most successful theatrical producer of all-time, has become the first British producer ever to be inducted into Broadway’s prestigious Theatre Hall of Fame at a ceremony at the Gershwin Theatre in New York on January 27. Joining Mackintosh as this year’s inductees are actors Cherry Jones and Ellen Burstyn; directors Jerry Zaks and George C. Wolfe; designer David Hays; and, posthumously, playwright Lorraine Hansberry.

Cameron Mackintosh said in a statement: ‘I am deeply honoured that The Theater Hall of Fame has selected me to join this remarkable group of Broadway talents. Being part of the Broadway community for more than 30 years has been one of the most satisfying, thrilling parts of my life and career, so I am extremely grateful for this recognition.’

Founded in 1971 by James M. Nederlander, Earl Blackwell, Gerard Oestreicher and L. Arnold Weissberger, the Theatre Hall of Fame honors Lifetime Achievement in the American Theatre. To be eligible for nomination to the annual ballot, a theatre professional must have 25 years on Broadway and, at least, five major production credits. The annual ballot has 50 nominees in 10 categories, and over 300 members of the Theatre Hall of Fame and American Theatre Critics Association are the voting body. The top eight nominees receiving the most votes are annually inducted.

For over 45 years, Cameron Mackintosh has been producing more musicals than anyone else in history, including the three longest-running musicals of all-time: Les Misérables, The Phantom of the Opera and Cats. He received the Tony Award for Best Musical as producer for all three shows. He also received the Tony Award for Best Revival of a musical for his production of Rodgers & Hammerstein’s Carousel in partnership with the Lincoln Center Theatre. Mary Poppins, his co-production with Disney, is now also dispersing its magic globally. His new production of Miss Saigon is getting ready to open at the Prince Edward Theatre in London in May where advance ticket sales have already broken box office records.