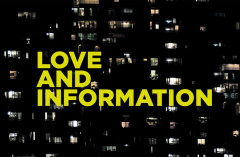 ‘I’ve something to tell you’

‘So you need to look at me’

In this series of encounters, over 100 characters are tasked with making meaning and joining up the dots.

Caryl Churchill (b.1938) is one of the UK’s most influential playwrights. Her many plays include Owners, Seven Jewish Children, Drunk Enough to Say I Love You, Top Girls, This is a Chair, Far Away, A Number, The Skriker, Cloud Nine, Serious Money, Escaped Alone and Pigs and Dogs.

Ian Redford’s previous theatre credits includeOur Country’s Good, Shopping and F**king, Some Explicit Polaroids, The Permanent Way (Out of Joint), Laughing Matter, She Stoops to Conquer, Love The Sinner, Mother Clap’s Molly House (National Theatre), Candide, A Mad World My Masters, The Roaring Girl, Arden of Faversham, The Witch of Edmonton, The Alchemist (RSC), Linda (Royal Court Theatre), Antigone, Dr Faustus, A View from the Bridge (Royal Exchange Manchester), The Secret Theatre, Romeo and Juliet (Shakespeare’s Globe), ‘M’ Butterfly (Shaftesbury Theatre) and Chapter Two (Gielgud Theatre). For television his credits include Foyle’s War, New Tricks, and as series regular Keith Appleyard in Coronation Street. His film credits include The Remains of The Day, Antonia and Jane, Mary and Martha, Getting it Right, Annie 2, Three Men and a Little Lady and The Man with The Iron Heart.

Caroline Steinbeis was the recipient of the 2009 JMK Award. She was previously on attachment at the National Theatre and in 2008 completed the Director’s Course at the NT Studio. She was International Associate at the Royal Court under Dominic Cooke, developing and directing workshops and new plays from all over the world. As a director, her credits include Edward II (Arts Theatre, Cambridge), The Tempest (Royal and Derngate), The Crucible, Brilliant Adventures (Royal Exchange), We Want You to Watch (National Theatre), The Broken Heart (Shakespeare’s Globe), Show 6 of Secret Theatre (Lyric Hammersmith), Talk Show, Mint, A Time to Reap (Royal Court), Earthquakes in London (National Theatre as Associate, and the UK tour director), Fatherland (Gate Theatre and Radical Jung Festival, Munich), and Caryl Churchill’s Mad Forest (BAC for which she won the 2009 JMK Award).