The London Palladium Wall of Fame 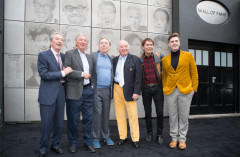 Today Andrew Lloyd Webber with honoured artists Des O’Connor, Jimmy Tarbuck, Cliff Richard and Tommy Steele unveiled the Wall of Fame, a new art installation by Lee Simmons commissioned as part of the renovations to the Grade II listed facade of The London Palladium. Sited at the theatre’s world famous Stage Door on Great Marlborough Street, this ongoing installation is a permanent legacy to the many artists that have headlined at The London Palladium and will provide an intrinsic link between icons of the past and performers of the future.

Andrew Lloyd Webber said “As part of the theatre’s ongoing refurbishment the opportunity arose to create a Wall of Fame and I am delighted that young artist Lee Simmons agreed to create what is a wonderful tribute to many of the Palladium’s performers throughout its 108 year history. The London Palladium is a very special theatre for me as it is to millions of people around the world and I hope that our new installation will give as much pleasure to locals and visitors to the West End as it has us.”

Lee Simmons said “For this installation, I have been inspired by the history of the rich tapestry of performers that have graced the stage of The London Palladium. I have used stainless steel to create the portraits which have been cut using digital processes. My aim was to embrace the presence of the performers and capture an essence of the Palladium stars who have made the theatre what it is today.”

An award-winning Royal College of Art graduate, Lee Simmons describes his work as a synthesis that brings together architecture, art and design and exploits the relationship between their blurred peripheries. Simmons is currently working on a number of high profile projects around the capital and his work can be found in both public and private collections. His recent commissions include a War Memorial for the City of Westminster.